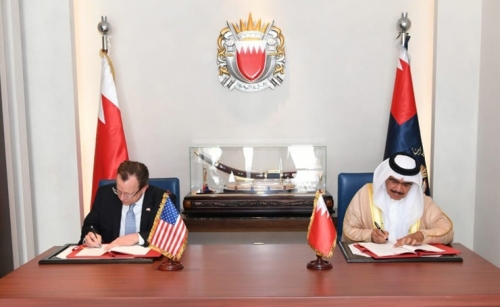 Interior Minister General Shaikh Rashid bin Abdulla Al Khalifa and outgoing US Ambassador Justin Siberell signed yesterday an agreement letter between the two countries, to promote bilateral ties in the detection of explosives and other related materials, as part of counter-terrorism training and cooperation between the concerned authorities of both sides.

The signing came in a meeting between the two high-ranking officials, which was attended by Public Security Chief Lt-General Tariq Al Hassan. The Interior Minister welcomed the US Ambassador and expressed appreciation for his efforts and roles in supporting bilateral ties between the two friendly countries, especially in security, and wished him all the best.

He wished Bahrain and its citizens development and prosperity. Also at the meeting, the Interior Minister presented the US Ambassador a memorial gift out of appreciation to his efforts in promoting cooperation between Bahrain and the US.