Taking the green leap | THE DAILY TRIBUNE | KINGDOM OF BAHRAIN 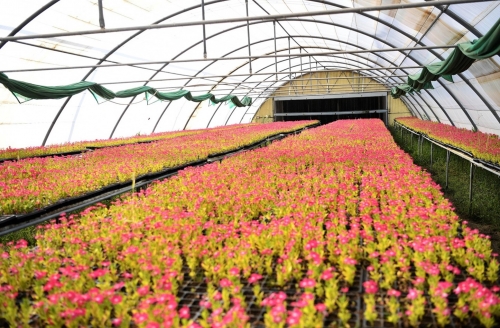 It was earlier reported that Bahrain’s streets are set to be beautified by using one million seedlings of seasonal summer flowers produced by the Works Ministry. The nursery, Minister of Works, Municipal Affairs and Urban Planning, Essam Khalaf said, was instrumental in creating 10 thousand square meters of green areas, as it produced more than halfa-million petunias, more than three million seedlings of different varieties of seasonal flowers, as well as more than 250 thousand trees and shrubs of various types.

Parks of various municipalities, governorates, street projects, governmental agencies, schools, hospitals, and NGOs are also beneficiaries of the park. “Our strategy is to enhance the number of environmentally friendly trees and shade trees appropriate for Bahrain’s climate,” the minister said adding, the production in this regard has reached more than 250 thousand seedlings and trees.

He added, “The nursery also produces neem trees, which reaches a height of 15 meters. It is one of the most popular ornamental trees.” Undersecretary for Municipal Affairs, Sheikh Mohammed bin Ahmed Al Khalifa, said the project contributed to enhancing local production, hone the skills of Bahrainis and reduced the operational costs.

The officials said the ministry is developing agricultural production programmes associating both modern and contemporary methods. He said plans are also anvil to make the project more appealing to students as well as for a farmers’ market.

Meanwhile, it was earlier reported that the works of Manama water garden have attained more than 85 per cent completion with the ministry planting various fruit trees including lemon, pomegranate, mango and fig, as well as aromatic trees such as Indian jasmine at the facility.