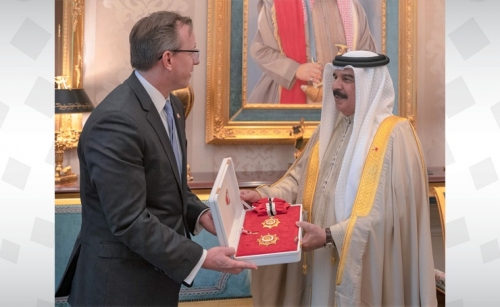 His Majesty King Hamad bin Isa Al Khalifa yesterday bestowed on US Ambassador Justin Siberell the Order of Bahrain-First Class, as a tribute to his efforts in enhancing relations between the two friendly countries. HM the King did this as he received at Sakhir Palace the US Ambassador. They reviewed strong bilateral relations, which HM the King praised while stressing growing cooperation in various fields.

HM the King underlined the Kingdom’s constant keenness to boost ties and serve common interests, lauding the pivotal role of the US administration on the international scene as well as its efforts to promote regional and global peace and security.

The US Ambassador expressed his heartfelt thanks and respect to HM the King for the order, lauding HM the King ’s major role and continuous support to consolidating the distinguished partnership between the two nations.