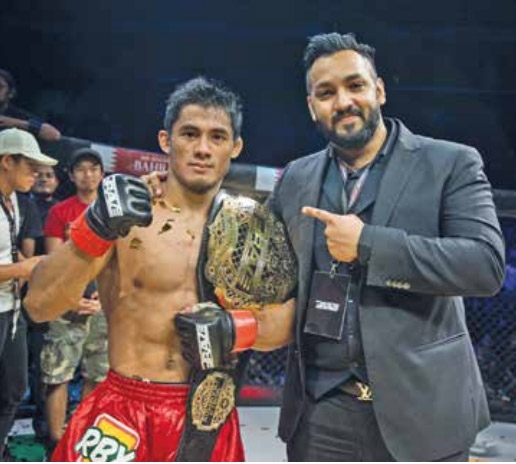 The most recent example came from the Philippines, where the longest-reigning World Champion in BRAVE Combat Federation, Stephen “The Sniper ” Loman was honoured by the city government of Baguio City, in recognition of his achievements in the sport of Mixed Martial Arts. The commend, presented by city representatives, acknowledges the outstanding accomplishments of Stephen through his career and especially during the year of 2019, in which he successfully defended his world title twice (including once at home at BRAVE CF 22, in the Philippines) and his impact in the Baguio City community, where Loman and his gym Team Lakay are both based. A long-time veteran of BRAVE Combat Federation, being part of the very first card put together by the Bahrain-based promotion, Stephen Loman is the Bantamweight world champion in the fastest-growing MMA organization in the world since November, 2017.

Undefeated under the BRAVE CF banner, “The Sniper” has defended his world title for four times, with triumphs overseas, including Northern Ireland, India, and Bahrain, alongside his home country of the Philippines. With 14 wins in his professional career and only two losses, Loman quickly rose through the rankings and secured a spot among the top Bantamweights in the world, regardless of promotion and affiliation. Coming off a unanimous decision win over Louie Sanoudakis last November, at BRAVE CF 30, Stephen Loman now waits for his next BRAVE Combat Federation challenge, in which he aims to expand his title-reign record. After starting 2020 with its debut in Slovenia, BRAVE Combat Federation is currently preparing the last details for its upcoming show in Brazil. The Bahrain-based promotion will land in the South American country on March 28th for BRAVE 35. The event will be held in the city of Balneário Camboriú and will feature 13 international fights, including the Lightweight title fight between Brazil’s Cleiton “Predator” vs Sweden’s Guram Kutateladze headlining the fight card.