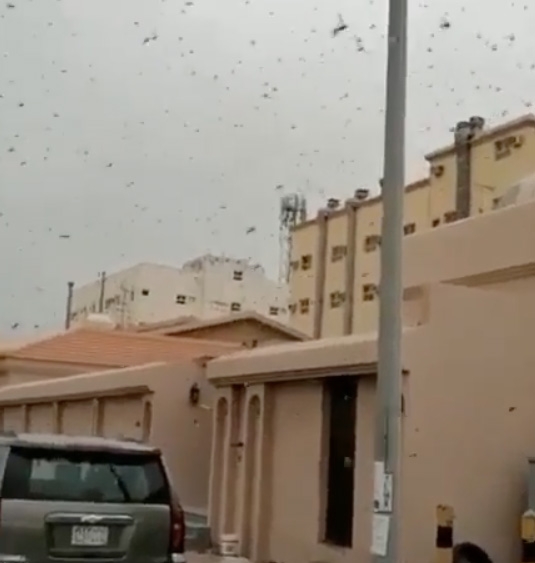 No damage was done to the crops here after locusts invaded the country last week.

The locusts that has been described as dangerous to crops did not destroy any farms in the Kingdom, said sources.

Strong winds from Saudi Arabia had caused swarms of locusts to invade Bahrain on Thursday.

Citizens and residents were astonished to see scores of locusts descending from the sky. Many videos of the locust swarms had gone viral on social media.

According to Prevention Web, a knowledge base about disaster management, a single desert locust swarm the size of Brussels could consume Belgium’s entire food supply in a single day.

However farmers said, although they were fearful, crops were not harmed by the locusts.

Authorities sprung into action with Ministry of Works, Municipalities and Urban Planning sending teams to deal with the situation before it gets out of hand.

The spread, the ministry source said, can be contained by employing various measures including spraying of insecticides. According to ministry sources, no farms in Bahrain were damaged.

The ministry stated that experts in the field are monitoring the situation and that a continuous communication is ongoing with the Saudi Arabian authorities.

Reportedly, winds have transported locusts from Saudi Arabia to Bahrain, Yemen and Oman. The ministry also stated that there is no need to panic.

Reportedly, many people here have been catching locusts to eat it, considering it a delicacy.

Experts say they are a source of protein, but there are also warnings against eating locusts due to risk of diseases.

Locusts are vulnerable when they are just eggs in the ground but they are hard to spot. When they hatch into masses of what are called hoppers, they can be dealt with easily. The problem is that such colonies are often in remote areas where there is very little incentive for the host country to deal with them. Soon, they will move on and become someone else’s problem.

After hatching, the hopper still cannot fly and remains an essentially solitary creature. It becomes gregarious only after it has fledged, taking to the skies en masse and riding the easterly winds to fresh pastures, just as it has since ancient times.

Swarms can vary in size from 1 square kilometer, consisting of about 40 million locusts, to several hundred square kilometers. With each locust consuming roughly its own weight – 2 grams – in fresh food per day, a modest 1-square-kilometer swarm will eat as much in a single day as about six elephants, 20 camels or 35,000 people.

A swarm can cover up to 130 kilometers in a day and stay in the air for many days at a time, so the Red Sea – which is barely 300km across at its widest point – presents no barrier. In 1988, one swarm took only 10 days to migrate 5,000km across the Atlantic.