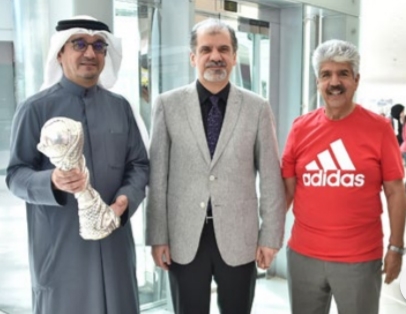 Seef Mall - Seef District organised a five-day sports event, starting from February 11 to February 15 at the West Wing of the Mal as part of Bahrain Sports Day in its fourth annual edition, under the slogan “Get. Set. Go”. Seef Mall - Seef District invited the players of the Bahrain National Football Team to the event which included competing in matches on a miniature street football court inside the Mall.

Among the entertaining activities was also a specially-made dome where customers felt the excitement of scoring goals in a challenging. The Mall also invited children from the Royal Charity Organisation (RCO) to celebrate the day and meet their favorite stars, reaffirming its social commitment. Reflecting its appreciation of the accomplishment of the Bahrain National Football Team players, who recently achieved the historical win of the 24th edition of the Gulf Cup, the Mall held a special lunch banquet in their honor, with the participation of senior management members of Seef Properties.

On the occasion, Seef Properties CEO Ahmed Yusuf commented: “Our active participation to celebrate this important event shows the Mall’s commitment towards supporting national initiatives that are aimed at developing a healthy culture and promoting awareness on the importance of healthy living as well as the role that sports play in improving our lives.”