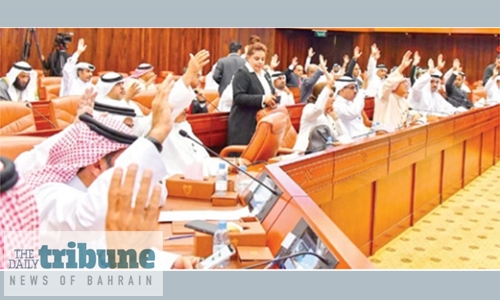 Majority of MPs yesterday voted for a decree-law that obliges private sector establishments pay 30 per cent of wages of individuals conscripted  in the military reserve force of Bahrain Defence Force (BDF).

This came as the lawmakers convened for their weekly meeting yesterday and debated the legislation, which also mandates the public sector to pay the salary of the reserve force member who is called to serve in the force in case of emergency, war, or general mobilisation measures.

It stipulates that private sector establishments shall contribute to paying the wages of the members of the force for one year, while BDF will bear the disbursement of salaries if the soldiers continue serving in the force for more than one year. The voting took place following a prolonged debate, in which the majority of MPs conveyed their endless support to the legislation, taking into consideration the rapidly escalating events in the region.

During the discussion, Defence Affairs Minister Major-General Abdullah bin Hassan Al Nuaimi explained that the reserve force was established as a supportive force to the BDF back in 1987, adding that “the Government’s submission of a decree law on amending the Reserve Force Law of the BDF is a result of the current situation in the region, accelerated events, and regional and international threats”.

He mentioned that the law-decree referred to the Council of Representatives includes the development of the reserve force and deals with the amendment of Article 10 concerning the reorganisation of wages, salaries and allowances for members of the force and civilian volunteers. A military reserve force is a military organisation composed of citizen-soldiers of a country who combine a military role or career with a civilian career.

These individuals consist of retired military personnel, as well as civilian volunteers. They are not always under arms and their main role is to be available to join the army and fight when their military requires additional manpower in cases of war or emergencies.