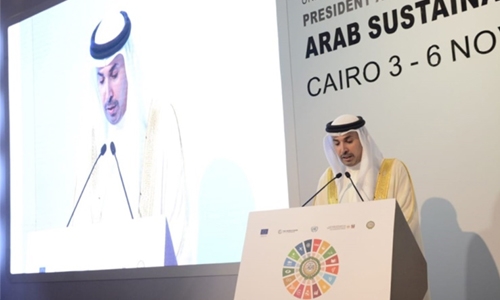 The Ambassador of the Kingdom of Bahrain to the Arab Republic of Egypt and Permanent Representative to the League of Arab States, Shaikh Rashid bin Abdulrahman Al Khalifa, assured that the Kingdom of Bahrain had presented its first voluntary national report to the High-Level Political Forum in July 2018, which reviewed the achievements of the Kingdom in the field of sustainable development and the efforts made to achieve them under the leadership of His Majesty King Hamad bin Isa Al Khalifa.

In his speech, the ambassador stressed that the Kingdom of Bahrain has been able to achieve the first objective of sustainable development, which is to eradicate poverty as well as the second and third goals, during the past ten years. He also noted that the current government is building five new and modern cities to provide more housing opportunities for citizens, highlighting the adoption by the United Nations General Assembly of the initiative of His Royal Highness Prime Minister, Prince Khalifa bin Salman Al Khalifa, to declare April 5 as the International Day of Conscience, in a move that enhances cultural peace to achieve SDGs.

The Bahraini ambassador stressed that the Kingdom of Bahrain anticipated in advance the implementation of the Sustainable Development Goals through the establishment of the necessary institutional arrangements, namely the establishment of the National Committee for Information and Population headed by the Minister of Cabinet Affairs and the membership of relevant authorities.

He pointed out that the Committee has taken on the task of following up, localising and implementing the SDGs through government programmes in partnership with the private sector, civil society and academic bodies.  He further explained that the current government programme 2019-2022 includes general objectives that intersect with the main areas of the Sustainable Development Goals to achieve them by promoting the basic constants of the State and society, financial sustainability and economic development, in addition to securing a supportive environment for sustainable development.

Concerning the Kingdom’s achievements, the Ambassador detailed that the Kingdom of Bahrain was able to surpass the first goal of eradicating extreme poverty through economic growth and raising the average family income by 47 per cent during the past ten years, noting that all citizens in the Kingdom enjoy good health care and access to free treatment and medicines, and access to all immunisations and vaccinations necessary for children, which led to a decrease in maternal mortality, low mortality of children below the global levels, and low incidence of infectious diseases and premature deaths, as well as life expectancy at birth has risen to around 77 years.

The ambassador revealed how one of the most important goals of sustainable development in the Kingdom is that basic education is free and compulsory, and the illiteracy rate is only 2.5 per cent.  With regard to the provision of adequate housing, the constitution stipulates that “the state shall endeavour to provide housing for low-income citizens”. Thus, under the constitution, the government is implementing five new housing cities equipped with modern infrastructure and facilities to the best international standards, consequently providing adequate housing for more than 36,000 Bahraini families of low income groups.

Lawmaker calls for assessing traffic history of drivers before fining them