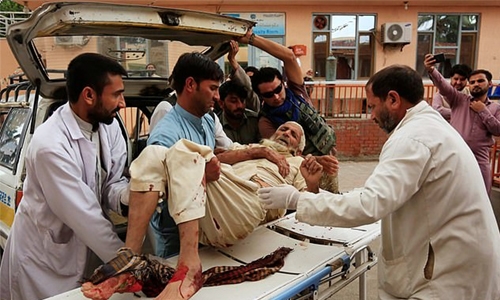 The Kingdom yesterday strongly condemned the terrorist bombing of a mosque in Nangarhar province of the Islamic Republic of Afghanistan, which resulted in several deaths and injuries. The Foreign Ministry expressed the Kingdom’s deep condolences and sincere sympathy to the families and relatives of the victims and wishes speedy recovery to all those injured in this terrorist act, which is incompatible with all religious principles and moral and human values.

It also affirmed the Kingdom of Bahrain’s solidarity with the Islamic Republic of Afghanistan in its efforts to combat terrorism of all forms.  It reiterates the Kingdom’s firm position in rejection of violence, extremism and terrorism, calling for joint efforts to eliminate this dangerous phenomenon of terrorism. At least 62 people have been killed and dozens injured by a bomb during Friday prayers at a mosque in Afghanistan, according to a provincial spokesman.

The force of the blast, in eastern Nangarhar province, destroyed the building’s roof, eyewitnesses said. No one immediately claimed responsibility for the attack. The blast came the day after the UN said the number of civilian deaths in the war-torn country had reached unprecedented levels over the summer. According to the UN, 1,174 civilians were killed between July and September, the deadliest quarter since UN records began a decade ago.

Meanwhile, a BBC study which attempted to document every killing during the month of August found a fifth of all those who lost their lives were civilians. Attaullah Khogyani, the provincial governor’s spokesman, told the BBC that the 62 people killed and 36 more injured in Friday’s attack were worshippers. The mosque sits in the district of Haska Mina, about 50km (30 miles) from the provincial capital Jalalabad.