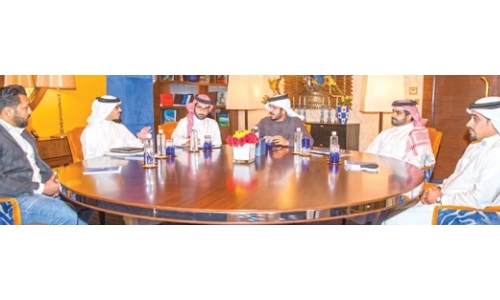 HH Shaikh Khalid bin Hamad Al Khalifa, Deputy President of the Supreme Council for Youth and Sports and President of Bahrain Olympic Committee has chaired the 2019 BRAVE International Combat  Week’s High Committee meeting as the Kingdom gears up to host this prestigious event which is taking place on November 10-16, 2019.

The meeting commenced with welcoming words from HH Shaikh Khalid bin Hamad Al Khalifa to the members, stating that this meeting comes as part of the efforts being produced by the Committee to prepare for the 2019 BRAVE International Combat Week which will take place for the third time running in the Kingdom of Bahrain and is considered Asia’s biggest MMA sport event. “The Committee will strive, through the 2019 BRAVE International Combat Week, to maintain Bahrain’s leading position as a host to major sports events at the continental and international levels.”

Moreover, a detailed explanation of the steps taken by the Committee was given to the members during the meeting and they were informed of the working groups and the supporting committees as well as the on-going preparations. In this context, HH Shaikh Khalid approved the Implementation Committee who will be led by the BMMAF President, stressing on the importance of making maximum efforts to make this event a tremendous success.

“Leading the IMMAF-WMMAA’s MMA ranking at the global level is something we are very proud of and this came thanks to HM King Hamad bin Isa Al Khalifa, the King of the Kingdom of Bahrain’s sponsorship to the MMA sport. “The follow-up of HH Shaikh Nasser bin Hamad Al Khalifa, Representative of HM the King for Charity and Youth Affairs and President of the Supreme Council for Youth and Sports to our progress has positively impacted this sport’s development in the Kingdom of Bahrain.”