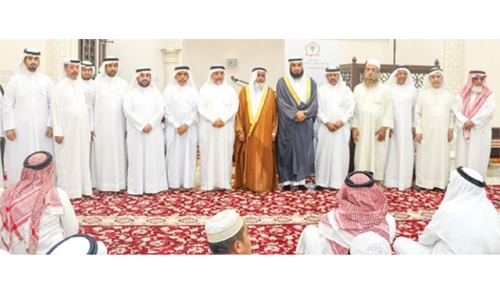 Chairman of the Sunni Endowments Council, Dr Shaikh Rashid bin Mohammed Al Hajeri, yesterday opened the ‘Al Noor’ Mosque, in the presence of scores of citizens and dignitaries from the Bukuwara region in East Riffa.  The move is within the goals of the Sunni Endowments Directorate to build and revamp houses of worship across the kingdom.

Dr Shaikh Rashid extended sincere thanks and appreciation to His Majesty King Hamad bin Isa Al Khalifa for his unwavering interest in the houses of worship, as well as for paving the way for establishing religious monuments, which, he said, paved the way for donors to participate in the construction of these mosques.

He expressed gratitude to the members of Al Sada family, who built the mosque, based on the recommendation of their late father, Hashim bin Abdullatif Al Sada, who was keen to rebuild the Al Noor Mosque, given its great importance in Riffa, in particular, and the Kingdom, in general.

He also extended similar thanks to all those who contributed to the reconstruction of the mosque, paying tribute to the President of the Supreme Council for Islamic Affairs, the Justice, Islamic Affairs and Endowments Minister and the Secretary- General of the Sunni Endowments Council.

Covering an area of 600 square metres and accommodating 1,000 worshippers, the mosque contains a housing unit for the muezzin and a library. It also uses energy-saving electrical appliances as well as solar energy.