Deal on the brink | THE DAILY TRIBUNE | KINGDOM OF BAHRAIN 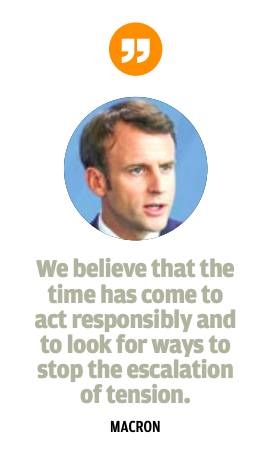 Deal on the brink

France, Britain, and Germany said yesterday they were preoccupied with the escalation of tensions in the Arabian Gulf region and risk of Iran’s 2015 nuclear deal falling apart, calling for dialogue between all the parties to resume.

The European nations said in a joint statement that following renewed sanctions by the United States on Iran, and Iran’s decision to no longer respect some of its obligations, the deal signed on this day four years ago could collapse.

“The risks are such that it is necessary for all stakeholders to pause, and consider the possible consequences of their actions,” the joint statement released by the French president’s office said. “We believe that the time has come to act responsibly and to look for ways to stop the escalation of tension and resume dialogue.

“The risks are such that is is necessary that all the parties take a pause and think about the possible consequences of their actions,” it added. This comes as Iranian President Hassan Rouhani said in a televised speech on Sunday that Tehran is ready to hold talks with the United States if Washington lifts sanctions and returns to the 2015 nuclear deal it exited last year.