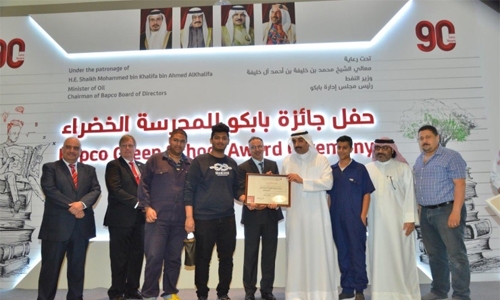 The Bahrain Petroleum Company (Bapco) yesterday held a Green School Award Ceremony to honour the winners of the academic year 2018/2019. Al Estiqlal Secondary School for Girls won the first place for its project “Recycling Aluminum Slag”, while Al-Noor Secondary School for Girls won the second place for its project “The Production Silage from Palm Residue”. Third place went to Al Jabriya Secondary Technical School for Boys for the project “Manufacturing a 3D Printer”.

Held in Bapco Club yesterday, the event was attended by Dr Mohammed Mubarak Juma, Undersecretary for Resources and Services at the Ministry of Education, in addition to senior officials from the National Oil and Gas Authority (Noga) and the Supreme Council for the Environment (SCE) as well as members of Bapco’s Board and Management. The event was held under the patronage of the Minister of Oil, Chairman of Bapco’s Board of Directors Shaikh Mohamed bin Khalifa bin Ahmed Al Khalifa.

Fraudster who fled to Bahrain after stealing gets jail in Jersey

For sale: a giant, ornery bird that killed its last owner