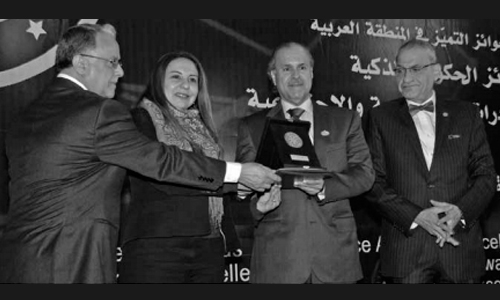 The Capital Governorate has achieved a significant milestone at the regional level by winning the Arab Government Shield Award for the year 2019. The Arab World Smart Government Awards, organised by the Excellence Awards Academy and held in Cairo, Egypt recognises outstanding and innovative government services across the Arab region.

The shield awarded by the Arab Center for Intelligent Services and Innovative Technology to the governments and official organisations of Arab countries that foster internet applications and technologies in line with global standards for official websites.  The mobile application MyCapital launched by the Capital Governorate was given the award, which was received, by Sheikh Hisham bin Abdulrahman Al Khalifa, Governor of the Capital, at a celebration in Egypt.

Sheikh Hisham bin Abdulrahman Al Khalifa, Governor of the Capital Governorate, said: “We are honoured to be awarded the Arab Smart Shield of 2019 for our mobile application called ‘Asmati’ granted by the Arab Center for Intelligent Services and Innovation.” “I would like to thank all the efforts of the Capital Governorate team that resulted in the governorate winning the award,” Sheikh Hisham added.

The Governor of the Capital further praised the efforts of the Ambassador of Bahrain to Egypt Sheikh Rashid Bin Abdulrahman Al Khalifa in enhancing the bilateral relations between the two countries.

The battle has just begun