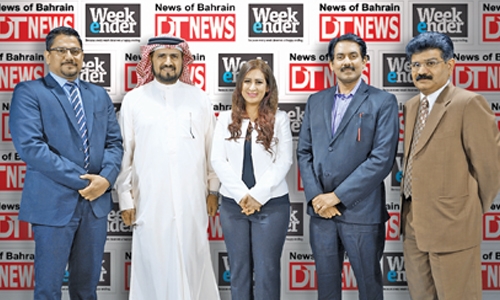 Manama : In line with the country’s celebration of the Bahraini Women’s day, the Daily Tribune yesterday announced the appointment of the Kingdoms first Deputy Editor-in-Chief Ahdeya Ahmed AlSayed.

The newspaper’s appointment of Ms Ahdeya comes in line with the Kingdoms celebration of Bahraini Women’s day, an annual event held under the patronage of Her Royal Highness Princess Sabeeka bint Ebrahim Al Khalifa, wife of His Majesty the King and President of the Supreme Council for Women, and affirms the newspapers belief in the empowerment of women in the press.

Ahdeya becomes the first female to be appointed in this post for an English Daily since the establishment of print media in Bahrain in 1939.

Ahdeya served as the country’s first spokesperson for its parliamentary and municipal elections in the year 2006. During that period she was also a member of the elections executive committee through heading the media committee that campaigned for the promotion of the country’s second elections.

She joined the press in 1991 as a junior reporter for an English daily and later joined Bahrain television as a television host, mainly shedding light on political issues. She then headed the news and features teams and trained young Bahrainis in the field of journalism.

At Bahrain Television she trained TV hosts and succeeded in achieving Bahrainisation on the English service.

She currently serves for the third term as board member of the Bahrain Journalists Association as head of the women’s committee and the international relations committee.

In her career, she also served as media advisor to the Ministry of Cabinet Affairs and Ministry of Information Affairs where she ran the English television service for five years.

In her 26 year career, Ahdeya continued as a columnist for both Arabic and English newspapers. She has interviewed world leaders and politicians and attended a major media-training programme at the United Nations premises in New York.

Ahdeya has a Masters degree in Mass Communication from the British University of Leicester.

DT’s Responsible Editor-in-Chief Captain Mahmoud AlMahmoud said in a statement yesterday that the newspaper was proud to have appointed the first female in this position based on its belief that Bahraini women are capable of making a big difference in the printed press when given the opportunity.

Ahdeya expressed her thanks to DT and said she hoped that this would be the first step towards giving women in the field of printed press higher managerial posts.

“In the past 26 years I’ve seen what we are capable of achieving as women and in the press I do believe that women should occupy higher managerial posts. We have reporters, columnists and heads of desks but what I personally hope to see is more women in decision making positions in the press.”