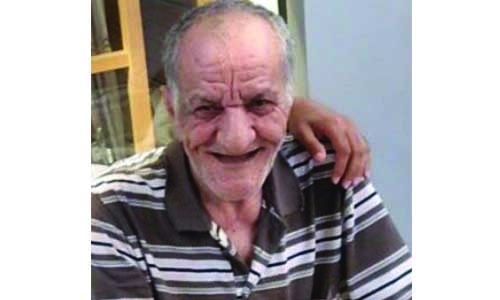 Manama : An elderly Bahraini man, who was missing in the Southern Governorate on Thursday, was found dead in Buhair area last night.

Hassan Qaedi, 70, was reported missing on Thursday dawn. He left his house in Buhair to perform Fajr (early morning) prayers in the nearby mosque as he usually does but never returned home.
Interior Ministry confirmed in a statement issued last night that “his body was found in Buhair area and the concerned departments had initiated its procedures”.
The deceased’s daughter Eman Hassan had informed DT News yesterday that her father was last seen on Thursday dawn.
“He was drinking his morning tea as usual. After he has his tea, he goes to the nearby mosque to pray. It has been two days and he still hasn't returned home,” She told.
“We checked with the Imam of the mosque along with our relatives, but we got nowhere. Later, we lodged a complaint at the Isa Town police station and they immediately initiated their investigations, along with dog search. The officials also told us that we will contact the Manama police station and look further into this matter.” She added.

Bright days ahead for clean energy