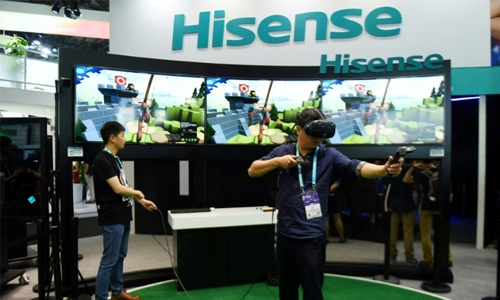 Zurich : Consumer electronics giant Hisense has become an official sponsor of the 2018 World Cup, becoming the second Chinese company to join hands with FIFA as it looks for new sponsors after the scandals of the Sepp Blatter era.

Hisense advertising will appear pitchside and on screens at the 2018 tournament in Russia, while its televisions will be the official TVs for the competition.

Hisense will also be associated with the Confederations Cup in Russia this summer, FIFA said in its announcement on Thursday, which did not reveal the sums of money involved.

Hisense also sponsored the Euro 2016 football championship in France and is a backer of the Australian Open tennis Grand Slam in Melbourne.

"Over the years, Hisense has gained a lot of experience and seen strong brand growth through sports sponsorships," group president Liu Hongxin said in the FIFA statement.

"We are honoured to take on our biggest challenge yet, the 2018 FIFA World Cup, and we believe that the competition will vastly improve global awareness and economic value for Hisense as a truly international brand."

Wanda last year became the first top-level sponsor signed by FIFA following the departure of long-time leader Blatter, who has been banned from football for six years for ethical abuses.

FIFA has been struggling to find new major sponsors since corruption scandals erupted in 2015.

Sony and Emirates Airlines quit as top-level sponsors after the 2014 World Cup, and were not immediately replaced.

Chinese companies, however, are indulging in a buying spree of global sporting assets, including top football clubs, sponsorships and media rights.

China's President Xi Xinping is keen to step up his country's sporting power, particularly in football, with talk of a Chinese bid for the 2026 World Cup.

FIFA makes about $5.5 billion in television and commercial deals between each World Cup. It has set a revenue target of $5.65 billion for 2015-2018.