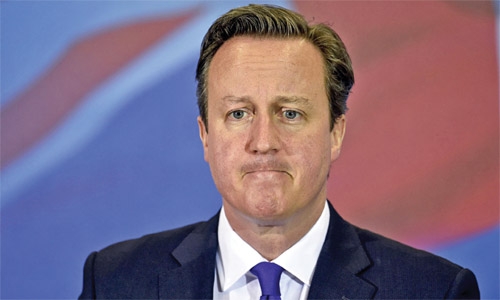 London : More than 300 business chiefs yesterday urged Britain to vote to leave the EU in June’s referendum, arguing in a joint letter that its bureaucracy stifled companies’ ability to grow.

The letter, published in The Daily Telegraph newspaper, comes days after the British government seized on warnings from the Bank of England and the International Monetary Fund on the financial consequences of leaving the European Union.

“Brussels’ red tape stifles every one of Britain’s 5.4 million businesses, even though only a small minority actually trade with the EU,” said the letter, whose signatories include Steve Dowdle, a former Sony vice-president for Europe, and David Sismey, a managing director at US investment bank Goldman Sachs. “It is business, not government, which generates wealth for the Treasury and jobs for our communities,” it added.

British Prime Minister David Cameron is fighting for his political future in the June 23 referendum, which polls suggest is neck-and-neck.

With less than six weeks until polling day, campaigning has become increasingly fractious. Finance minister George Osborne on Monday accused the Leave camp of indulging in conspiracy theories, insisting there was an “overwhelming consensus” among economists and world leaders that “Brexit”, or Britain leaving the EU, would be bad for Britain.

Ryanair boss Michael O’Leary meanwhile warned that the budget airline would be forced to scale back British investment if the country votes to leave the EU, as he unveiled the creation of 450 jobs in Britain under a $1.4-billion (1.24-billion euro) boost for the firm’s UK bases.