'A lot left to do' for Assad's forces in Syria: Putin | THE DAILY TRIBUNE | KINGDOM OF BAHRAIN 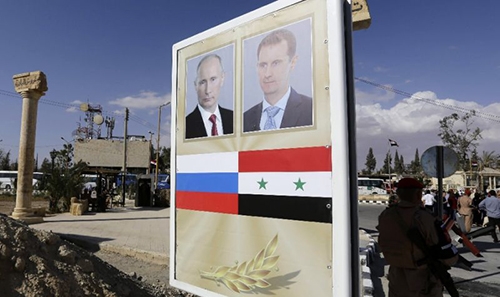 'A lot left to do' for Assad's forces in Syria: Putin

Moscow: Russian President Vladimir Putin on Tuesday said there remained "a lot left to do" for the forces of Syrian leader Bashar al-Assad despite Russian firepower hitting over 30,000 targets in the war-torn country.

The Kremlin strongman also admitted that the Russian operation in Syria has exposed unspecified "problems" for Moscow's military that need to be probed.

"Since the start of the operation the Russian airforce has carried out over 10,000 sorties against international terrorist infrastructure in Syria and conducted a large number of strikes, with over 30,000 targets hit," Putin told a meeting of military chiefs and weapons manufacturers.

Putin insisted that Moscow's strikes against the Islamic State group and Al-Qaeda affiliate Al-Nusra Front had been "precise, powerful and effective" but also said "the situation there is complicated and there is still a lot left to do for the Syrian army".

He conceded that the "operation in Syria has exhibited certain problems, insufficiencies" for Moscow's military without giving any further details.

"The most thorough investigation must be carried out into every problematic issue," Putin said.

Russia has been carrying out a bombing campaign in Syria in support of Assad's forces since September but has been accused by the West of targeting moderate regime opponents and hitting civilians.

Moscow is currently spearheading a diplomatic push alongside the United States to resolve the conflict and Putin once again highlighted that Moscow is interested in a political solution to the war.

Government forces and rebels in the Syrian battleground city of Aleppo agreed Monday to extend their truce for a second time, the army said, as the US and Russia vowed to "redouble" efforts to end the five-year conflict.

The two powers also agreed to try to extend a February 27 ceasefire across the whole of the country.

The ceasefire, which was brokered by Washington and Moscow and excludes jihadist rebel groups fighting President Bashar al-Assad's forces, has been greatly strained by the upsurge in violence in Aleppo.