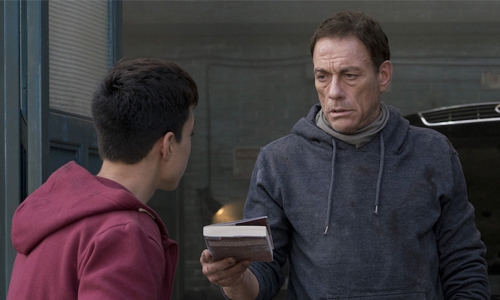 If you watch “We Die Young”—the new comingof-age/gangster drama hybrid—it’ll probably be because Jean-Claude Van Damme is the film’s headlining star. Sadly, Van Damme, the rare ‘80s action star who has (in recent years) given some thought to how he can age gracefully on-screen, is not in “We Die Young” a lot. Granted, a bigger role might not have improved Van Damme’s enjoyably twitchy performance as the mute, Oxycontin-addicted ex-marine, Daniel.

But Daniel is the most compelling part of “We Die Young,” a familiar story about reluctant teenage gang member Lucas (Elijah Rodriguez) and his seemingly impossible quest to break away from Mara Salvatrucha (aka: MS-13), a gang of Central American criminals who, in real life, have been associated with drug-running and child prostitution. Lucas’ story is also sometimes believable thanks to a strong performance by David Castañeda, who plays the brutal MS-13 gang leader Rincon.

But Castañeda and Van Damme’s scene-stealing performances don’t significantly improve writer/director Lior Geller’s frequent reliance on racial stereotypes and gangster movie cliches. You can tell that Geller doesn’t really care about his characters beyond a point just by watching his movie’s sensationalistic opening scene: Lucas (14 years old) gives viewers an unsettling tour of his corner of Washington D.C., one that concludes with Rincon quoting Shakespeare’s Shylock—a very selective reading of his famous “If you prick us, do we not bleed” speech—right before he encourages his minions to beat a random debtor to a bloody pulp.

Lucas casually mentions (through voiceover narration) that his neighbourhood is just a 20-minute bike ride away from the White House, an otherwise unrelated factoid that gives “We Die Young” a superficial kind of political relevance.