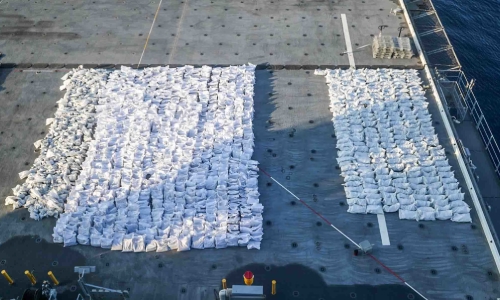 A fishing trawler smuggling “more than 50 tonnes of ammunition rounds, fuses and propellants for rockets” was intercepted by the US Navy’s Fifth Fleet in the Gulf of Oman along a maritime route from Iran to Yemen on December 1.

“Navy personnel operating from expeditionary sea base USS Lewis B. Puller (ESB 3) discovered the illicit cargo during a flag verification boarding, marking US 5th Fleet’s second major illegal weapons seizure within a month,” it added in a statement yesterday.

The trawler was carrying more than 1 million rounds of 7.62mm ammunition; 25,000 rounds of 12.7mm ammunition; nearly 7,000 proximity fuses for rockets; and over 2,100 kilograms of propellant used to launch rocket-propelled grenades.

“US naval forces remain focused on deterring and disrupting dangerous and irresponsible maritime activity in the region.”

The direct or indirect supply, sale or transfer of weapons to the Houthis in Yemen violates UN Security Council Resolution 2216 and international law.

Two weeks ago, Tim Hawkins, a spokesman of the US Navy’s Fifth Fleet, said that the United States is ready to confront any Iranian threats to the region.

In a statement to Al Arabiya, he said that the US is committed to preserving the security of the Straits of the Bab al-Mandeb and the Straits of Hormuz.

US Coast Guard ship USCGC John Scheuerman (WPC 1146) and guided-missile destroyer USS The Sullivans (DDG 68) intercepted the vessel in the Gulf of Oman.

US forces also found more than 100 tons of urea fertiliser, a chemical compound with agricultural applications that are also known for use as an explosive precursor.