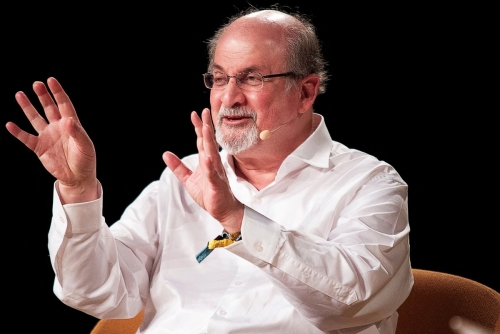 The United States on Friday imposed sanctions on an Iranian foundation it accused of issuing a multi-million dollar bounty for the killing of novelist Salman Rushdie, who was attacked at an event in August.

The U.S. Treasury Department in a statement said it had designated the Iran-based 15 Khordad Foundation a Specially Designated Global Terrorist, accusing it of placing a bounty on Rushdie after the 1989 call for his execution and increasing it in 2012 to $3.3 million.

Rushdie, 75, lost sight in one eye and the use of one hand following an attack on stage at a literary event in western New York in August, his agent said.

The agent declined to say whether "The Satanic Verses" author was still in hospital more than two months after police said a 24-year-old New Jersey man stabbed the writer in the neck and torso just before Rushdie was to give a lecture at Chautauqua Institution, a retreat about 12 miles (19 km) from Lake Erie.

The novelist's injuries also included wounds to his liver, Andrew Wylie, who represents literary giants such as Saul Bellow and Roberto Bolano, said at the time.

The man accused of attacking the novelist has pleaded not guilty to second-degree attempted murder and assault charges. He is being held without bail in a western New York jail.

"This act of violence, which has been praised by the Iranian regime, is appalling. We all hope for Salman Rushdie’s speedy recovery following the attack on his life," the Treasury Under Secretary for Terrorism and Financial Intelligence Brian Nelson said in the statement.

Friday's action freezes any U.S. assets belonging to the foundation and generally bars Americans from dealing with it. Those dealing in certain transactions with the foundation also risk sanctions.

Ayatollah Ruhollah Khomeini, then Iran's supreme leader, 33 years ago issued a fatwa, or religious edict, calling on Muslims to assassinate Rushdie a few months after his novel "The Satanic Verses" was published. Some Muslims saw passages in the novel about the Prophet Muhammad as blasphemous.

Rushdie, who was born in India to a Kashmiri Muslim family, has lived with a bounty on his head, and spent nine years in hiding under British police protection.