Iranian who offered to pay $300,000 to kill ex-Trump adviser charged: US | THE DAILY TRIBUNE | KINGDOM OF BAHRAIN 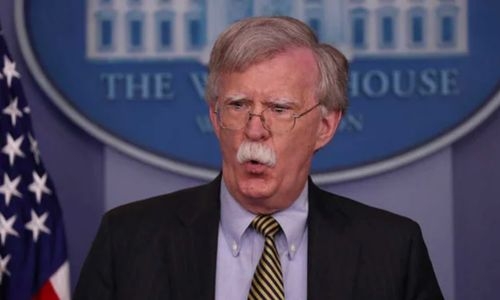 The US Justice Department said Wednesday it had uncovered an Iranian plot to kill former White House national security advisor John Bolton, and announced charges against a member of Iran's Revolutionary Guards.

The Justice Department said 45-year-old Shahram Poursafi had offered to pay an individual in the United States $300,000 to kill Bolton, the former ambassador to the United Nations.

The plan was likely set in retaliation for the US killing of top Guard commander Qasem Soleimani in Iraq in January 2020, the department said. According to the charges, Poursafi is a member of the Guard's elite Quds Force.

The allegation came as Iran weighs a proposed deal to revive the 2015 agreement that aims to prevent Tehran from developing nuclear weapons.

Former US president Donald Trump withdrew from the agreement in 2018. Ongoing talks in Vienna to rekindle it have been held up as the US and Tehran argue over Washington's designation of the Revolutionary Guards as a terrorist group.

US court filings say that in October Poursafi, working from inside Iran, contacted an unidentified person in the United States saying he wanted to commission photographs of Bolton.

That person passed the Iranian onto another contact, whom Poursafi then asked to kill Bolton for $300,000. He also dangled the possibility of a second target which would earn the ostensible assassin $1 million. The court papers did not identify that target, but according to US media outlet Axios, it was former secretary of state and CIA director Mike Pompeo.

However, the person Poursafi was dealing with was actually an informant for the US Federal Bureau of Investigation, according to the court filings. An FBI affidavit describes how the informant stalled for months as investigators appeared to seek out more information about Poursafi, his organization and superiors, and his apparent separate network inside the United States.

Poursafi was charged with the use of interstate commerce facilities in the commission of murder-for-hire, which brings up to 10 years in prison; and with providing and attempting to provide material support to a transnational murder plot, which carries a 15-year sentence.

The justice department said he remains at large, presumably in Iran. "Should Iran attack any of our citizens, to include those who continue to serve the United States or those who formerly served, Iran will face severe consequences," current White House National Security Advisor Jake Sullivan said after the charges were announced.

In encrypted messages with the informant, Poursafi said that the plot related to Tehran's desire for revenge for the US killing of Soleimani, according to the affidavit. Soleimani was head of the Quds Force and personally maintained its network of allies and proxies across the Gulf region.

He was targeted by a US drone strike just after he landed at Baghdad's airport on January 7, 2020. Since then Tehran has vowed to extract revenge, and the United States has ramped up security for prominent current and former officials, including Pompeo, who was leading the State Department when Soleimani was killed.

Bolton, like Pompeo a strong critic of Iran, was national security advisor in the White House of former president Donald Trump from April 2018 to September 2019, and ambassador to the United Nations from 2005-2006.

He was strongly opposed to the 2015 deal putting limits on Iran's nuclear program, and supported the Trump administration's unilateral pullout from the pact in May 2018.

Bolton blasted Iran's government as "liars, terrorists and enemies of the United States" in a statement on Wednesday. There was no immediate reaction from Tehran, which is reviewing a final draft agreement to restore the 2015 nuclear deal, officially called the Joint Comprehensive Plan of Action (JCPOA).

For months Tehran has held up the new agreement, demanding that the United States remove its designation of the Revolutionary Guards as a sponsor of terrorism. But the US has rejected that demand, repeatedly accusing the Guards of supporting violent groups around the Middle East and elsewhere.

In March, the Washington Examiner news website reported that the justice department was investigating an Iranian plot against Bolton and that the case was delayed by the nuclear negotiations.