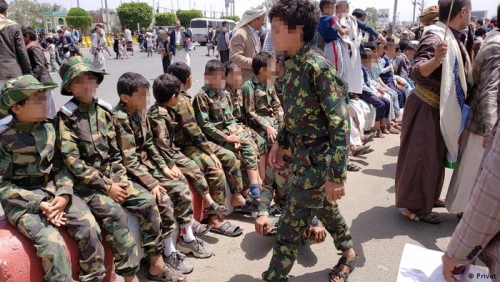 They warned that those recruited by the militia would become radical fighters who would undermine security in Yemen, the region, and the rest of the world. Their warnings and demands came as fresh videos leaked from Houthi-managed summer camps showed the militia subjecting children to endurance activities and training them to use arms.

Yemeni Information Minister Muammar Al-Eryani accused the Houthis of extensively enlisting children in areas under their control through annual summer camps where they brainwashed children, gave them military lessons, and later dispatched them to fight government troops.

“Houthi militia escalates child recruitment & pushing them to frontlines amid a surprising & unjustified Intl silence, & failure of human rights & child protection orgs to play their role in condemning this heinous crime, and stopping the mass killing of Yemeni children,” he tweeted, sharing a “shocking” video of children as young as 10 being trained at one of the camps.

He warned that they would go on to fuel violence in Yemen and undermine UN-brokered efforts to reach a sustainable peace settlement in the country. Last month, the Houthis launched their annual summer camps for children across densely populated areas under their control.

Saudi Arabia lifts travel restrictions due to coronavirus to India, three other countries