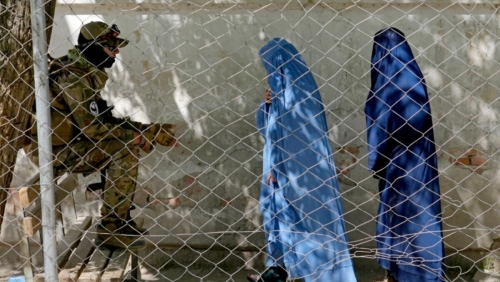 The UN Security Council called on Afghanistan’s Taliban rulers on Tuesday to “swiftly reverse” their policies and practices restricting the human rights of women and girls.

In a press statement approved by all 15 council members, the UN’s most powerful body expressed “deep concern” at the Taliban’s restrictions limiting girls’ access to education and women’s employment, freedom of movement and “full, equal and meaningful participation in public life.”

“These restrictions contradict the expectations of the international community and the commitments made by the Taliban to the Afghan people,” the council emphasized.

When the Taliban first ruled Afghanistan from 1996 to 2001, women and girls were subject to overwhelming restrictions — no education, no participation in public life, and women were required to wear the all-encompassing burqa.

Following the Taliban ouster by US forces following the 9/11 attacks in the United States, and for the next 20 years, Afghan girls were not only enrolled in school but universities, and many women became doctors, lawyers, judges, members of parliament and owners of businesses, travelling without face coverings.

After the Taliban overran the capital last August 15 as US and NATO forces were in the final stages of their chaotic withdrawal from Afghanistan after 20 years, they promised a more moderate form of Islamic rule including allowing women to continue their education and work outside the home, and initially announcing no dress code though they also vowed to impose Shariah.

But in recent weeks Taliban hard-liners have since turned back the clock to their previous harsh rule, confirming the worst fears of rights activists and further complicating Taliban dealings with an already distrustful international community.

Earlier this month, the Taliban ordered all women in public to wear head-to-toe clothing that leaves only their eyes visible. The decree said women should leave the home only when necessary and that male relatives would face punishment for women’s dress code violations, starting with a summons and escalating to court hearings and jail time.

The Taliban leadership has also barred girls from attending school after the sixth grade, reversing previous promises by its officials that girls of all ages would be allowed an education. And this week the Taliban began enforcing an order requiring all female TV news anchors in the country to cover their faces while on-air.

The Security Council statement, supported by Afghanistan’s neighbour China as well as the United States and Russia, called for the Taliban to “swiftly reverse” its actions and reiterated the council’s previous call “to adhere to their commitments to reopen schools for all female students without further delay”.

The council held emergency closed-door consultations on the Taliban’s crackdown on Afghan girls and women on May 12 at the request of Ireland and Mexico, co-chairs of its Informal Expert Group on Women, Peace and Security.

They called the Taliban’s latest actions appalling saying they confirmed that Afghan’s rulers have “no intention of promoting, respecting or upholding the rights of women and girls, or of honouring the multiple commitments that they have made to Afghan women and to the international community in recent months.”

Britain’s UN Ambassador Barbara Woodward said before the Taliban came to power last August, 3.6 million girls were in school, a quarter of the seats in parliament were held by women, and women comprised 20 per cent of the workforce. She stressed after that council meeting that women shouldn’t have to accept “a life banished to the sidelines”.

The Security Council statement also expressed “deep concern” at “the volatile situation in Afghanistan” especially continued terrorist attacks across the country targeting civilians and civilian infrastructure, and the cultivation and trafficking of illicit drugs. It also called for strengthened efforts to address “the dire humanitarian and economic situation” in the country.