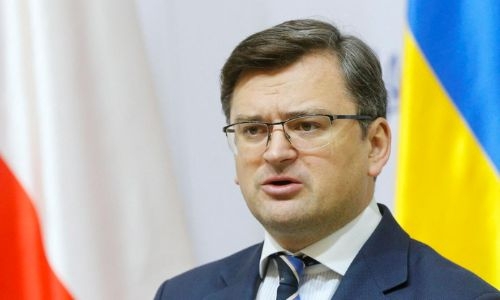 Ukraine wants a spot reserved in the European Union, even if obtaining full membership could take time, Foreign Minister Dmytro Kuleba said Thursday in Berlin. “It is not about the fastest possible membership for Ukraine in the EU. But what is very important for us is for this spot to be reserved for Ukraine,” he told German broadcaster ARD.

“We hear often that Ukraine belongs in Europe, belongs in the European family, and now it’s about reserving this place,” he added. French President Emmanuel Macron warned early this week that it would take “decades” for a candidate like Ukraine to join the EU.

Macron suggested instead that a broader European political community could be created to include members like Ukraine or post-Brexit Britain. Kuleba, who is in Germany both to meet German political leaders as well as to attend talks with counterparts from the G7 most industrialised nations, said he will discuss further sanctions against Russia over its military operation in Ukraine.

Another key topic, the ministry said, is the battle against global food shortages sparked by the war.