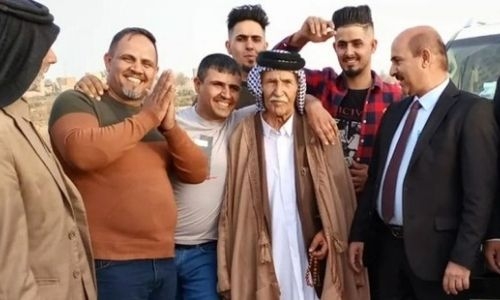 A 103-year-old Iraqi man with 15 children and hundreds of grandchildren has married for a third time and said he hopes his new wife will give him even more children. Hajji Mukheilif Farhoud Al-Mansouri, who is from southern province of Al-Diwaniyah and was born in 1919, last week married a 37-year-old woman in the Somar area, 180 kilometers from Baghdad.

One of Al-Mansouri’s sons, Abdul Salam, told Rudaw Media Network that after his mother died 23 years ago, his father remarried but the second wife left and returned to her family this year. Al-Mansouri waited for few months to see whether she would return, according to media reports. When she did not, he asked his children to find him a third wife “capable of giving birth to more children.”

Abdul Salam said: “Our choice was a nice woman, born in 1985. They got engaged and then a henna party was held, followed by a wedding that was attended by the sons and grandchildren.” Al-Mansouri told Rudaw that his wife is young and willing to have more babies.

He said he does not want anything from his children and just “prayed for God to bless them and to keep him company.” Al-Mansouri is a novice in the marriage and children stakes compared with his eldest son, Kadhem, 72, who has 16 daughters and 17 sons from nine marriages, and currently has four wives.

The Rudaw report quoted Kadhem as saying that the members of his family have always honored life and believe they should not be afraid to marry and have more children.