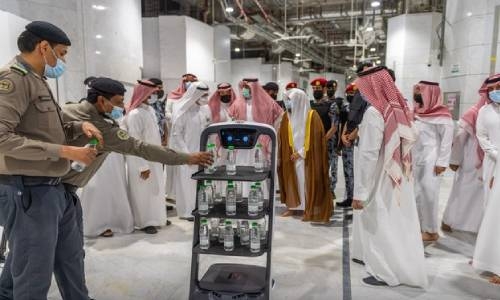 The Grand Mosque in Makkah has rolled out a robot to distribute Zamzam water bottles.

Undersecretary of the Zamzam Watering Department for Field Affairs at the Grand Mosque Badr Al Luqmani said the smart robot technology is based on an autonomous distribution of Zamzam water bottles within the health protocols and precautionary measures against COVID-19, Saudi Press Agency (SPA) reported.

There is also keenness on benefiting from artificial intelligence to serve the Holy Mosque, he said.

The robot needs 20 seconds to load the Zamzam water bottles and distributes 30 bottles in one round, which takes 10 minutes. It operates for eight hours.

The robot does not collide with people and does not hinder movement. It has received several certificates of approval including the European CS certificate.

Plans are underway to operate the robot on the widest scale and to handle bags and portable cylinders in the Grand Mosque, he added.

The operation is part of the “How to be a role model in the digital world” program aiming to enhance digital citizenship, raise awareness and teach the optimal use of IT and communication.

It also aims to study the awareness of community members in the use of digital world applications and their enjoyment of skills and sound ethics through the Internet and technology.