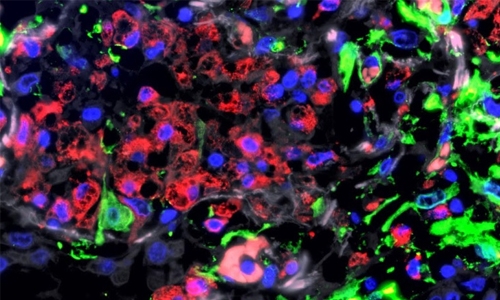 We've long known what damage a severe case of Covid-19 can do to a person's lungs, but the precise reasons for this damage are still being studied.

With a study that may help develop better treatments for people infected with the coronavirus, researchers in Germany have now shown that Covid-19 is often accompanied by severe scarring of the lung tissue.

A team of researchers led by Leif-Erik Sander at the Charite hospital in Berlin say that lung failure may not cause by viral replication itself, but by the body's immune system response, among other factors.

Their findings, published in the scientific journal Cell, suggest that Sars-CoV-2 causes the scavenger cells of the immune system to start scarring processes that ultimately damage the lungs, according to the Deutsche press agency (dpa).

This response ultimately means that Covid-19 patients have to be supplied with oxygen for an extraordinarily long time or even have to be ventilated using an artificial lung (ECMO). If the Covid-19 case is severe, patients will often develop acute respiratory distress syndrome (ARDS).

In their study, the researchers led by Sander concluded that the lung tissue of the patients was becoming scarred, thickened and inelastic. Very similar processes occur in a previously incurable form of lung scarring, idiopathic pulmonary fibrosis.

The scientists first examined the lung tissue of deceased patients under the microscope and found characteristic features of severe fibrosis.

"Almost all affected patients showed extensive tissue damage. The majority of the alveoli had been destroyed and the alveolar walls showed extensive thickening. We also found ubiquitous deposits of collagen, the main component of scar tissue," said Peter Boor from the Institute of Pathology at RWTH Aachen University.

Typically, lung failure does not develop until two to three weeks after the first symptoms appear, Sander explained.

"This suggests that lung failure is not caused by the uncontrolled viral replication, but by secondary host responses, including those involving the immune system."

As a result, the team next examined the immune cells in the lungs of severely ill or deceased Covid-19 patients.

They found that the lungs of affected patients witness an accumulation of macrophages - immune cells that eliminate pathogens or cellular debris, but that is also involved in wound healing.

In severe Covid-19 cases, they seem to come into contact with certain cells of the connective tissue. These then multiply strongly and form large amounts of collagen.

Subsequent investigations in cell cultures suggested that Sars-CoV-2 triggers the misdirected reaction of the macrophages. Flu viruses, on the other hand, do not.

"Our data, therefore, show parallels between Covid-19 and idiopathic pulmonary fibrosis," said Antoine-Emmanuel Saliba from the Helmholtz Institute for RNA-based Infection Research in the German city of Wuerzburg.

"This may explain why some of the risk factors for Covid-19 are also risk factors for idiopathic pulmonary fibrosis. These include underlying medical conditions, smoking, male sex and being aged over 60.”

Unlike idiopathic pulmonary fibrosis, the cause of which is unknown, the scarring in Covid-19 patients is repairable, the researchers say. In the course of recovery, the thickenings and scarring at least partially dissolve again.

A more detailed investigation of the regression processes should now contribute to developing possible treatment options for both diseases or to preventing the scarring from the outset.