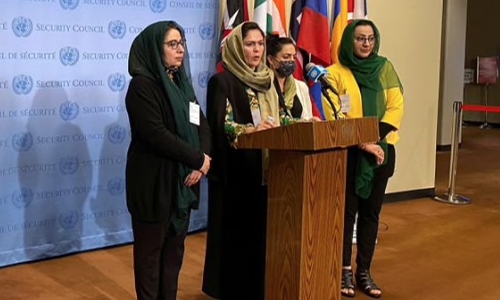 Taliban should not be allowed to gain a seat at the world body, a group of Afghan women urged the United Nations. They also called for better representation for their country during a visit to the organisation’s New York headquarters.

“It’s very simple,” former Afghan politician and peace negotiator Fawzia Koofi told reporters outside the UN Security Council in New York. “The UN needs to give that seat to somebody who respects the rights of everyone in Afghanistan.”

Koofi was joined by former politician, Naheed Fareed, former diplomat Asila Wardak and journalist Anisa Shaheed. “When the Taliban took Afghanistan ... they said that they will give permission to women to resume their jobs, to go back to the school, but they didn’t keep that promise,” said Fareed.

Since seizing power in mid-August, Taliban leaders have vowed to respect women’s rights in accordance with sharia, or Islamic law. But under Taliban rule from 1996 to 2001, women could not work and girls were banned from school.

Women had to cover their faces and be accompanied by a male relative when they left home. The United Nations is considering rival claims on who should represent Afghanistan.

The Taliban nominated their Doha-based spokesman Suhail Shaheen as UN ambassador, while Ghulam Isaczai - the UN envoy representing the government ousted by the Taliban - is seeking to remain in the country’s seat.

UN member states are expected to make a decision by the end of the year. Wardak urged countries to pressure the Taliban “to put their words in action” when it comes to women’s rights, adding: “If you’re going to give them a seat, there should be conditions.”

The women spoke to reporters before addressing a UN event on support for Afghan women and girls, organized by Britain, Qatar, Canada, UN Women and the Georgetown Institute for Women, Peace and Security.

The UN Security Council also met separately on Thursday to discuss women, peace and security. “Women and girls in Afghanistan are pinning their hopes and dreams on this very council and world body to help them recover their rights to work, travel and go to school,” Isaczai told the 15-member council. “It would be morally reprehensible if we do nothing and let them down.”