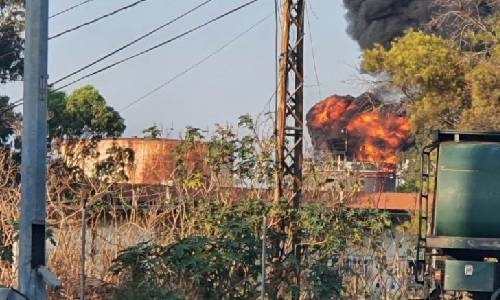 A huge fire broke out at an oil facility in southern Lebanon, state media reported Monday, saying the cause was not immediately known.

State-run National News Agency said no workers were nearby when the fire ignited in a giant gasoline tanker in the coastal village of Zahrani. NNA said fire engines rushed to the area to help fight the blaze, The Associated Press (AP) reports.

The fire is close to one of Lebanon’s main power stations, which stopped functioning two days ago due to a fuel shortage. Lebanon is struggling through a serious power crisis in which electricity is cut for up to 22 hours a day.

Thick black smoke billowed over the area from the Zahrani Oil Installation, about 50 kilometers (30 miles) south of Beirut.

Monday’s fire comes more than a year after a blaze at Beirut’s port triggered a massive explosion that killed at least 215 people, wounded thousands and destroyed the facility and nearby neighborhoods. The explosion at Beirut’s port was caused by hundreds of tons of ammonium nitrate, a highly explosive material used in fertilizers, that had been improperly stored for years.

The material has been stored at the facility since the 1950s, when it was run by the Mediterranean Refinery Company, or Medreco. Medreco was an American company whose main shareholders were Mobil and Caltex and it was active in Lebanon for four decades until the late 1980s.