We will allow girls back in school as soon as possible: Taliban | THE DAILY TRIBUNE | KINGDOM OF BAHRAIN 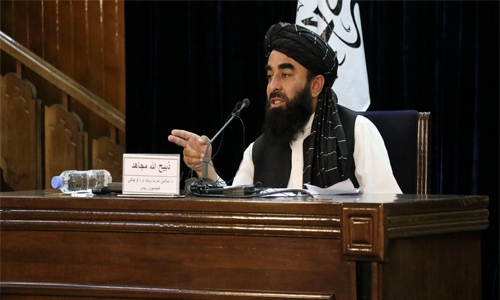 Taliban spokesman Zabihullah Mujahid on Tuesday, 21 September, said girls in Afghanistan will be allowed to go back to school 'as soon as possible, reported AFP.

"We are finalising things... it will happen as soon as possible," he said on girls' education while announcing the remaining cabinet ministers of the Taliban government.

"These positions are considered important for the functioning of the Emirate," he said.

Mujahid also said that the Taliban had funds to pay government salaries but needed more time, reported The Times of India.

According to Bloomberg, Mujahid said that the current Taliban government is an interim one and will soon include women, minorities and professionals.

Without giving any timeframe, he also said that their group is working towards adding women in government positions and experts to improve its cabinet.

Earlier, the Taliban ministry of education had said that schools would be re-opening for boys from Saturday, 18 September. "All teachers and male students should attend school," the statement had said. However, there was no mention of girls in the statement.

Meanwhile, Mujahid said nothing relating to the now-closed women's ministry.

The ministry, which was shut down last week, had been replaced by their Ministry for Promotion of Virtue and Prevention of Vice.

Meanwhile, India Today reported that the Taliban has asked Afghanistan media outlets not to broadcast the Indian Premier League, currently being held in the UAE, due to the presence of female spectators in the stadium.