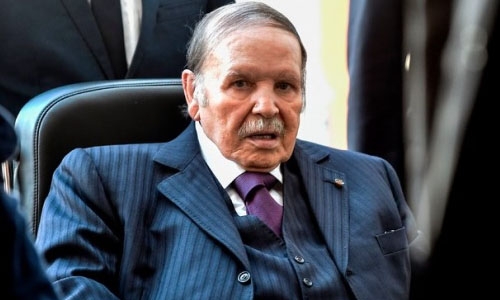 Bouteflika was the longest-serving president of Africa's largest country, and was forced to step down in 2019 after months of mass street protests against his 20-year rule, said dpa international.

Bouteflika has rarely been seen in public since he suffered a stroke in 2013. Even German Chancellor Angela Merkel had to cancel a planned visit in 2017 at the last minute because Bouteflika's state of health did not allow it.

He survived the widespread protests in the Arab world in 2011, intitially avoiding being deposed like his counterparts in Tunisia, Egypt and Libya.

He was long considered by Western leaders as a reliable partner in the fight against terrorism.

Bouteflika had ruled the country for four consecutive terms since 1999, but when he announced he would run for a fifth term in spring 2019, anger erupted in Algeria.

The move sparked mass protests, with millions of participants and demonstrators demanding his departure from the government.

The military eventually withdrew its support and Bouteflika was forced to resign a few days before the end of his fourth term.

Bouteflika came to power in 1999 during the final years of war between the state and Islamist factions.

The decade-long civil war began after the army intervened to prevent an Islamist party winning the country's first multi-party elections in 1992. It is estimated at least 150,000 people died.

Bouteflika negotiated a peace deal that led to a dramatic reduction in violence.

His longevity is often credited to the fact that Algerians were still traumatized by the brutal war and baulked at rocking the boat, despite widespread disenchantment with a stagnating economy and his regime's corrupt, authoritarian ways.

The diminutive politician was one of the last of a generation of Algerian leaders from the 1954-62 war of independence from France.

Born on March 1, 1937 in Morocco to Algerian parents, Bouteflika was a high school dropout.

At 19, he enlisted with the National Liberation Front (FLN), fighting in the west of the country under later president Houari Boumediene.

He became the country's youngest minister when the country gained independence, winning the sports portfolio at 25.

Praised for his diplomatic and rhetorical skills, he soon moved on to foreign minister, a position he held for 16 years.

Bouteflika's loyalists have praised him for keeping the country stable amid regional turmoil.

The opposition criticized him for staying in power for too long, saying he was so physically incapacitated in his final years of life that his entourage ran the country.

At the end of his political career, he stood at the head of an oil- and gas-rich nation that failed to let its people benefit from its wealth.

High unemployment and a lack of prospects for well-educated young people led to repeated protests.

He was also accused domestically of failing to break away from the influence of powerful military leaders.

He had several foreign policy successes, such as brokering a peace agreement for Mali, settling the Ethiopia-Eritrea border war and establishing closer relations with Germany and the US.

He signed a declaration of friendship and cooperation with France's then-president Francois Hollande in 2012 during a visit which saw Hollande admit the cruelty of French colonial rule in the country.

Health woes had plagued Bouteflika for years. In 2005, he spent several weeks in Paris receiving treatment for what was presented as a stomach ulcer. There was speculation that he might have had stomach cancer, but it was never confirmed.

He suffered his first stroke in 2013, and never fully recovered.