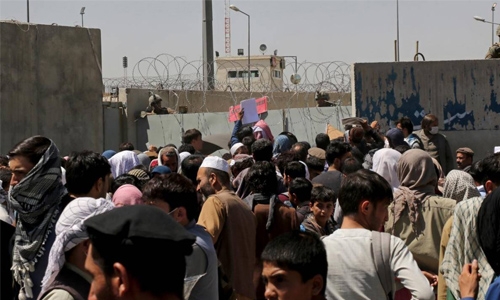 An explosion outside Kabul airport on Thursday killed at least 13 people, including children, a Taliban official told Reuters.

He also said the blast wounded many Taliban guards.

A US official said US service members were among the wounded, adding he was citing an initial report and cautioning that it could change. He said there were casualties but did not know how many or of what nationality.

Pentagon press secretary John Kirby said there had been an explosion and it was unclear if there were any casualties. A Western diplomat in Kabul earlier said areas outside the airport gates were “incredibly crowded” again despite the warnings of a potential attack. A witness said several people appeared to have been killed or wounded.

“We can confirm an explosion outside Kabul airport. Casualties are unclear at this time. We will provide additional details when we can,” said Pentagon Spokesman John Kirby.

Western nations had warned earlier in the day of a possible attack at the airport in the waning days of a massive airlift. Suspicion for any attack targeting the crowds would likely fall on the Daesh group and not the Taliban, who have been deployed at the airport’s gates trying to control the mass of people.

Adam Khan, an Afghan waiting outside the airport, said the explosion went off in a crowd of people waiting to enter the airport. Khan, who said he was standing about 30 metres away, said several people appeared to have been killed or wounded, including some who lost body parts.

Several countries urged people to avoid the airport earlier in the day, with one saying there was a threat of a suicide bombing. But just days — or even hours for some nations — before the evacuation effort ends, few appeared to heed the call.

Over the last week, the airport has been the scene of some of the most searing images of the chaotic end of America’s longest war and the Taliban’s takeover, as flight after flight took off carrying people.

Overnight, warnings emerged from Western capitals about a threat from Afghanistan’s Daesh group affiliate, which likely has seen its ranks boosted by the Taliban’s freeing of prisoners during their blitz across the country.

British Armed Forces Minister James Heappey told the BBC early on Thursday there was “very, very credible reporting of an imminent attack” at the airport, possibly within “hours.” Belgian Prime Minister Alexander De Croo said his country had received information from the US and other countries about the “threat of suicide attacks on the mass of people”.