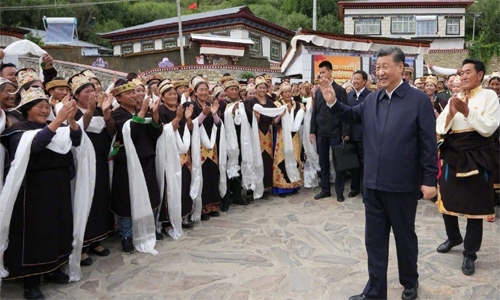 President Xi Jinping is on a rare trip to China’s politically sensitive region of Tibet, state media reported yesterday, the first such visit by the country’s top leader in more than three decades.

Tibet has alternated over the centuries between independence and control by China, which says it “peacefully liberated” the rugged plateau in 1951 and brought infrastructure and education to the previously underdeveloped region.

In footage released yesterday by state broadcaster CCTV, Xi was seen greeting a crowd wearing ethnic costumes and waving Chinese flags as he left his plane, in a red carpet welcome as dancers performed around him.

Although he arrived on Wednesday at the Nyingchi Mainling Airport in the southeast of Tibet, there was no mention of his visit in official media until two days later.

After a “warm welcome by cadres and masses of all ethnic groups”, Xi went to the Nyang River Bridge to learn about ecological and environmental protection of the Yarlung Tsangpo River and the Nyang River, CCTV said.

Xi has visited Tibet twice, once in 1998 as Fujian province’s party chief and another time in 2011 as vice-president. The last Chinese president to visit was Jiang Zemin in 1990.

This time, Xi also visited the Nyingchi City Planning Museum and other areas to look into urban development planning, rural revitalisation and the construction of urban parks. On Thursday, he headed to the Nyingchi Railway Station to learn about planning for the Sichuan-Tibet Railway before taking a train to Lhasa.