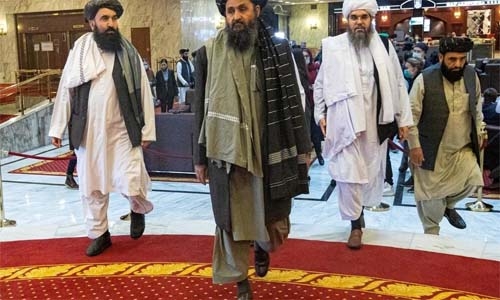 The Taliban said yesterday they remain committed to peace talks but insisted a “genuine Islamic system” in Afghanistan was the only way to end the war and ensure rights -- including for women.

Talks between the militants and the Afghan government have been deadlocked for months and violence has surged across the country since May when the US military began its final withdrawal.

Despite the rise in violence, Taliban co-founder and deputy leader Mullah Abdul Ghani Baradar said yesterday that the group was committed to the peace talks. “Our very participation in the negotiations... indicates openly that we believe in resolving issues through (mutual) understanding,” Baradar said in a statement.

He said the only way to end the conflict in Afghanistan was to establish an Islamic system after the departure of all foreign forces. “A genuine Islamic system is the best mean for the solution of all issues of the Afghans,” Baradar said.

His statement acknowledged the fears in Afghanistan and abroad about the kind of system that would emerge -- and its impact on women -- saying that fell “within the ambit of the intra-Afghan negotiations”.

Baradar also assured that the rights of all Afghans including women would be accommodated in that system, according to “the glorious religion of Islam” and Afghan traditions.