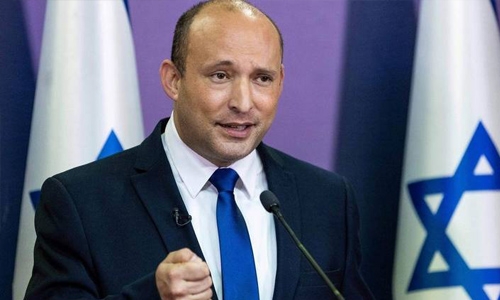 The 120-member Knesset voted in favor of an improbable coalition put together by centrist Yair Lapid, with a razor-thin majority but enough to end veteran Prime Minister Benjamin Netanyahu’s 12 unbroken years at the helm.

The coalition deal sees Bennett, an estranged former protege of Netanyahu, serve first as prime minister in a rotation deal, before Lapid takes over after two years.

The son of American-born parents who speaks perfect English, he is ultra-liberal on the economy. He shares this ideology with Netanyahu, having served in several of the Likud leader’s governments.

But in recent years tensions between intensified and Netanyahu made little effort to hide his disdain for Bennett.

In late May, two months after Israel’s fourth inconclusive election in two years, Bennett reached a deal with Lapid that paved the way for the improbable eight-party coalition approved by parliament on Sunday.

Bennett lives with his wife Gilat and their four children in the central city of Raanana.

He entered politics after selling his tech start-up for $145 million in 2005, and the next year became chief of staff to Netanyahu, who was then in the opposition.

He took politics by storm in 2012, taking charge of the hard-right Jewish Home party, which was facing annihilation.

He increased its parliamentary presence fourfold while making headlines with a series of incendiary comments about Palestinians.

But he was not asked to join a unity government in May 2020 — a move seen as an expression of Netanyahu’s personal contempt towards him.

In 2020, in opposition and with the coronavirus pandemic raging, Bennett put aside his right-wing rhetoric to focus on the health crisis. He moved to broaden his appeal by releasing plans to contain Covid-19 and aid the economy.

Former supporters and critics have accused Bennett of betraying his nationalist voters by joining a coalition that includes dovish Meretz and support from the Arab Israeli Islamic conservative party Raam.

But Bennett has said he is on a mission to restore Israel’s governance and avoid the fifth election in little more than two years.

In an interview with Channel 12 news, he justified his decision to join the “change” coalition despite explicit campaign pledges to not be part of a government headed by or formed with Lapid.

“The core promise of these elections was to extract Israel from chaos,” he told.

“I chose what’s good for Israel.”

While risking alienating his traditional right-wing base by breaking a campaign promise in order to topple Netanyahu, Bennett’s move could enable him to broaden his support in the long run.

“The chance to serve as prime minister is a huge opportunity for Bennett to present himself as prime ministerial material,” said Toby Greene, a political scientist at Bar Ilan University near Tel Aviv.

Bennett could thus “present himself to (the) Israeli mainstream as the natural successor to Netanyahu, as the candidate of the Right who has shown he can run the country”, he said.