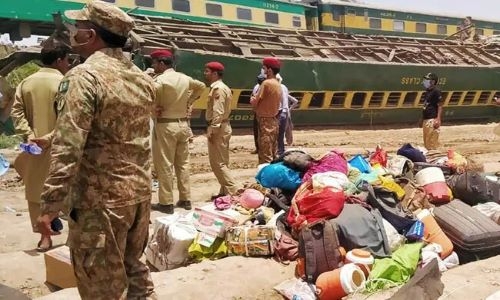 At least 40 people were killed and dozens injured Monday when a packed Pakistani inter-city train ploughed into another express that had derailed just minutes earlier, officials said.

Several people were still trapped in the mangled wreckage near Daharki, in a remote part of rural Sindh province, which took rescue workers with specialist equipment hours to reach.

The double accident happened around 3.30 am (2230 GMT) when most of the 1,200 passengers aboard the two trains would have been dozing.

"We tumbled upon each other, but that was not so fatal," Akhtar Rajput, a passenger on the train that derailed, told AFP.

"Then another train hit us from nowhere, and that hit us harder. When I regained my senses, I saw passengers lying around me, some were trying to get out of the coach."

The Millat Express was heading from Karachi to Sargodha when it derailed, spilling carriages onto the track carrying the Sir Syed Express from Rawalpindi in the opposite direction.

"I was disoriented and trying to figure out what happened to us when the other train hit," Shahid, another passenger, told AFP.

"One coach is under the engine, and we can see three bodies trapped inside," he told AFP.

"Two other bodies have been reported elsewhere too, so we fear that the death toll will rise," Tufail added.

A clip aired on a local channel showed medics giving an intravenous drip to a conscious passenger whose lower torso was trapped between crushed carriage benches.

Local farmers and villagers were the first at the site, with huge crowds gathering around the carnage of several overturned Pakistan Railways carriages -- some clambering on top in an attempt to reach survivors.

The dead were laid out in rows on train seat benches and covered in traditional scarves.

The accident happened on a raised section of track surrounded by lush farmlands.

Interior Minister Sheikh Rashid, a former railways minister, said the track where the accident occurred was built in the 1880s and described it as "a shambles".

A senior police official said he had already warned authorities about the "dangerous condition" of the tracks and carriages.

The Pakistan army and paramilitary rangers from nearby bases were at the site to help.

Prime Minister Imran Khan said he was "shocked" by the accident and promised a full inquiry.

Gul Mohammad, who works with the Edhi Foundation ambulance service which was helping move dead bodies away from the site, said communication problems were hindering the coordination of the rescue efforts.

"I am talking to you as I stand on the rooftop of my ambulance for better signal," he told AFP.

Rail accidents are common in Pakistan, which inherited thousands of kilometres (miles) of track and trains from former colonial power Britain.

But the network has seen decades of decline due to corruption, mismanagement and lack of investment.