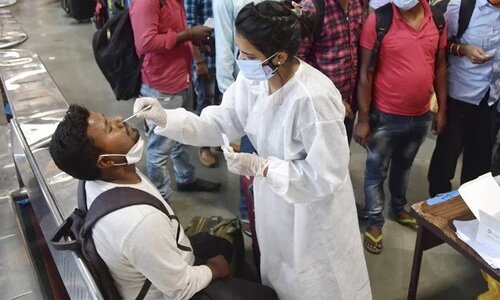 Health ministry figures showed 295,000 new cases in 24 hours, on a par with numbers seen in the United States in January, and 2,023 fatalities, bringing the country's total death toll to 182,553.

In an address to the nation on Tuesday night, Prime Minister Narendra Modi said that the country of 1.3 billion people was "once again fighting a big fight".

"The situation was under control till a few weeks back, and then this second corona wave came like a storm," Modi said.

There had been hopes that despite its packed cities and poor health care, India had managed to dodge largely unscathed a pandemic that has killed more than three million people around the world.

Production of key coronavirus drugs slowed or even halted at some factories and there were delays inviting bids for oxygen generation plants, according to press reports.

Now distraught relatives are being forced to pay exorbitant rates on the black market for medicine and oxygen and WhatsApp groups are awash with desperate pleas for help.

Delhi Chief Minister Arvind Kejriwal, who on Tuesday went into self-isolation after his wife tested positive, tweeted late Tuesday that some hospitals in the megacity "are left with just a few hours of oxygen".

The United States now advises against travelling to India, even for those fully vaccinated, while Britain had added India to its "red list". Hong Kong and New Zealand have banned flights from the country