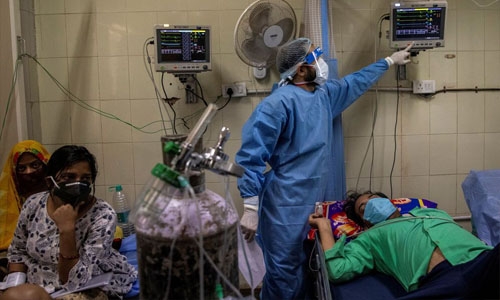 Less than 100 critical care beds were available in the city of more than 20 million people, Chief Minister Arvind Kejriwal said on Sunday, as social media was flooded with people complaining about lack of beds, oxygen cylinders and drugs.

"The bigger worry is that in last 24 hours positivity rate has increased to around 30% from 24% ... The cases are rising very rapidly. The beds are filling fast," Kejriwal told a news briefing.

In a separate statement, the city government said it had informed Prime Minister Narendra Modi's federal administration about "the dire need of beds and oxygen" and beds were now being set up in schools.

New Delhi, which has imposed a weekend curfew, is among the worst hit cities in India, where a second major wave of coronavirus infections is straining health infrastructure.

Nationwide, India reported 261,500 new cases on Sunday, taking the total number of cases to nearly 14.8 million, second only to the United States, which has reported more than 31 million infections. The country's deaths from COVID-19 rose by a record 1,501 to reach a total of 177,150.

As cases rise across India, criticism is mounting over how Prime Minister Narendra Modi's administration has handled the health crisis, as religious festivals and election rallies attended by thousands continue.

India’s government relaxed almost all lockdown curbs of last year by the beginning of 2021, although some regions including New Delhi and the state of Maharashtra, home to financial hub Mumbai, have introduced localised restrictions.

While Mumbai remains under curfew on all days as per state guidelines, New Delhi has allowed cinema halls to operate at 30% capacity and people to move freely during weekdays.

"There is no option but to lockdown Delhi for 1-2 weeks," said Dr. Ambrish Mithal, a top doctor of endocrinology and diabetes at hospital operator Max Healthcare, adding that weekend curfews "won't do".

"(The) situation is unmanageable at present," he said on Twitter.

Amid reports of severe shortage of oxygen supplies and critical medicines such as the anti-viral drug Remdesivir, Modi on Saturday asked authorities to pull out all the stops to ramp up production of COVID-19 vaccines and asked his teams to work closely with local governments.

Addressing a large gathering of his supporters in West Bengal on Saturday, Modi said: "I can see a sea of masses. I haven't seen a rally like this."

The Aam Aadmi (Common Man) Party, which is in power in the capital, New Delhi, mocked Modi's political rallies by posting pictures on social media of funeral pyres at overburdened crematoriums of the city.

"I deplore his (Modi's) remarks," Yashwant Sinha, a former cabinet minister who broke away from the BJP, said on Twitter, adding that they were insensitive.

Congress leader Rahul Gandhi - who has also addressed election rallies in recent weeks - said on Sunday he was suspending all his public rallies in West Bengal.

Amit Shah, the government's interior minister and Modi's close aide, addressed an election rally in the state on Sunday which was attended by thousands of people, few of whom followed social distancing norms, according to a video on his Twitter account.

Adding to the crisis, at least five coronavirus patients died in a hospital fire late on Saturday in Raipur, the capital of the central state of Chhattisgarh.