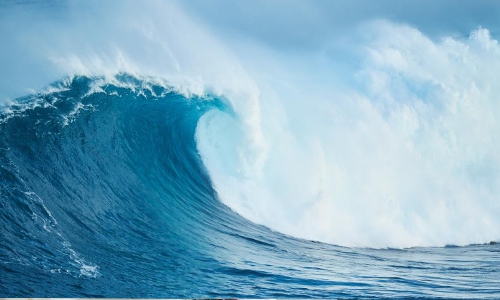 Tsunami warnings were lifted across several South Pacific islands Friday allowing tens of thousands of evacuees to return home, as the risk from a series of powerful earthquakes appeared to ease.

Quakes of 7.3, 7.4 and 8.1 magnitudes struck near New Zealand's remote Kermadec Islands in quick succession early Friday, followed by dozens of powerful aftershocks and a slew of tsunami warnings across the Pacific.

Thousands headed for high ground as waves of up to three metres (11 feet) had been predicted in New Caledonia and Vanuatu, with states and territories from New Zealand to Peru, Russia to Antarctica also put on high alert.

In New Zealand, authorities said the entire town of North Island Town of Opotiki, about 4,000 people, had been emptied out.

Six hours drive up the coast, Keith Wooderson said he sought refuge in the hills outside town.

"There were queues and queues of cars as far as the eye could see. We didn't even get out of our van, we just waited for the all-clear," he said. "There was no panic, it was all pretty orderly."

In the end, the largest surges of one metre were reported in New Caledonia's Loyalty Islands, and eyewitnesses in the Vanuatu capital Port Vila's saw only a few outsized waves slosh against the seafront, soaking the pavement promenade.

There were no reports of major damage and the only immediate impact to human health appeared to be mild dehydration among commuters stuck for hours in heavy traffic on the French island of Tahiti.

The Pacific Tsunami Warning Center said that the threat had not completely ended -- South and Central America could still see modest tsunami waves arriving from 1330 GMT -- but many warnings from local authorities were lifted.

Authorities in Australia, New Caledonia, New Zealand, Vanuatu and French Polynesia were among those rescinding or downgrading their initial warnings.

The sense of relief stood in stark contrast to early fears, when sirens rang out, seaside schools were evacuated and some parents were told to move to high ground immediately without trying to collect their children -- for fear traffic would block emergency routes and leave many of them vulnerable or stranded.

In New Zealand, where there had been an evacuation order for a swathe of coastal communities, Prime Minister Jacinda Ardern expressed relief.

"It's hard not to feel like our country is having a run of bad luck, when you have an earthquake, a tsunami alert and a pandemic to contend with all in one day," she said.

Fiona Rudsdale, who runs the Whangarei Central Holiday Park on New Zealand's North Island, slept though the initial quake but was woken by tsunami warning sirens.

She immediately began organising the evacuation of around 30 guests from the caravan park to a nearby hilltop.

"We took them up to the top of Morningside Park, you can look down on the town from there," she told AFP.

"We put on some food and drink, it all went pretty smoothly. You've still got a couple of idiots in town driving around but mostly everyone's behaving themselves and doing what they're told."

In other areas some hardy or foolish residents were seen braving the ocean for a swim or surf.

"Very swiftly people pulled themselves together, got their backpacks, got into cars and congregated either inland or up high and are now watching it unfold," she said.

The local coastguard ordered hundreds of boats still on the ocean to deeper waters as a precaution.

It was preceded by two seismic jolts that were also enormously powerful, in an unusually strong cluster even for the Pacific ring of fire, where the Earth's tectonic plates collide.

"On average, a magnitude eight or larger earthquake only occurs once a year anywhere in the world, so this is a significant earthquake and at a depth and magnitude to potentially generate a tsunami," said Adam Pascale, chief scientist at ESS Earth Sciences.

Prime Minister Ardern was among those given an early morning wake-up.

"Hope everyone is ok out there -- especially on the East Coast who would have felt the full force of that earthquake," she posted on Instagram after the initial shake at 2:27 am.

The South Pacific nation recently marked the 10th anniversary of the Christchurch earthquake, when a 6.3 tremor resulted in 185 deaths in the South Island city.