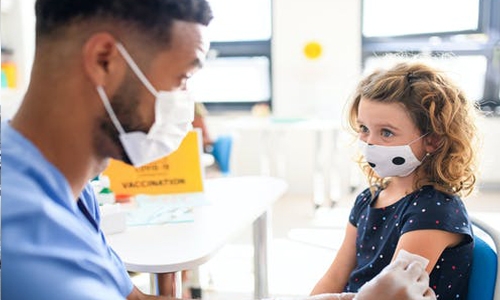 The United States could start vaccinating older children against Covid-19 by the fall and younger ones by year-end or early 2022, the White House’s top pandemic advisor Anthony Fauci said on Sunday.

The mass vaccination of school-age children will allow millions of kids to return sooner to in-person learning and ease the burden on parents now caring for their offspring at home.

School reopenings, and intensely debated matter, have varied sharply across the country, with some private and religious schools opening before public schools and teachers in some areas protesting any early return.

But the decision Saturday by the US Food and Drug Administration to grant emergency use authorisation to a new single-dose vaccine from Johnson & Johnson has boosted the prospects for earlier reopenings.

“We now have three really efficacious vaccines,” Fauci said on ABC’s “This Week”.

For now, none of the three vaccines in the US (also including Pfizer/BioNTech and Moderna) has been cleared for children under 16, but trials on children are underway.

Children in high school — roughly ages 14-18 in the United States — should be able to get the vaccine “sometime this fall,” Fauci told NBC’s “Meet the Press”.

“I’m not sure it’ll exactly be on the first day that school opens, but pretty close to that,” he added.

Data are still being compiled on the vaccines’ safety and efficacy for children in elementary or middle school — usually aged between five and 13 years old — so “realistically” they may not be able to receive the vaccine until late 2021 or early 2022, Fauci said.

“On behalf of the moms, dads and children of America, I call on Joe Biden to get the schools open and get them open now,” said Trump.

Although the federal government issues guidelines on public health, it is largely up to locally elected school boards when to reopen classrooms, not the president.

Children and adolescents are less commonly infected with the virus than adults, and in-person learning in schools has not been associated with substantial community transmission.

With Covid-19 still ravaging the US, the worst-hit country in the world, roughly half of students are currently attending school in person, the New York Times reported recently.

Earlier this month the US Centers for Disease Control and Prevention (CDC) issued new guidelines urging schools to reopen safely and as soon as possible.

The CDC recommends vaccination for teachers and staff as soon as supply is available, and calls for different approaches depending on the level of community transmission in a given area.