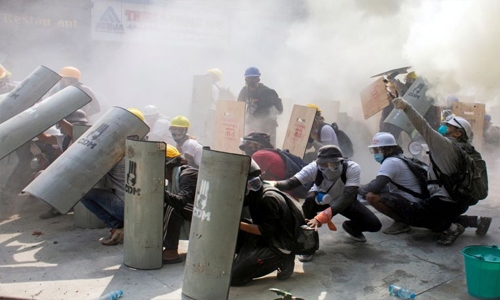 The United Nations condemned a violent crackdown on protesters in Myanmar on Sunday and urged the country’s military rulers to stop using force.

The security forces shot dead at least six demonstrators on Sunday on the bloodiest day since the military staged a coup four weeks ago.

“We strongly condemn the escalating violence against protests in Myanmar and call on the military to immediately halt the use of force against peaceful protesters,” Ravina Shamdasani, spokeswoman for the Office of the High Commissioner for Human Rights, said in a statement.

Protesters were shot and killed in at least three cities, as police and soldiers attempted to bring a civil disobedience campaign to heel.

“The people of Myanmar have the right to assemble peacefully and demand the restoration of democracy,” said Shamdasani.

“These fundamental rights must be respected by the military and police, not met with violent and bloody repression.

“Use of lethal force against non-violent demonstrators is never justifiable under international human rights norms.”

The office of UN human rights chief Michelle Bachelet also reiterated a call for the immediate release of all those arbitrarily detained, including members of the elected government.

“The international community must stand in solidarity with the protestors and all those seeking a return to democracy in Myanmar,” said Shamdasani.