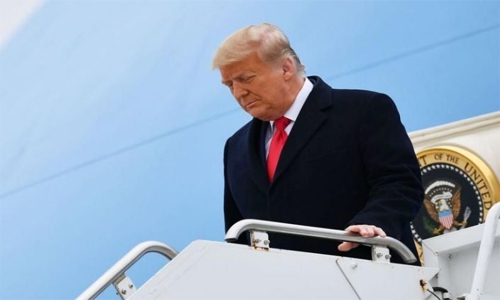 Dozens of Republicans in former President George W. Bush’s administration are leaving the party, dismayed by a failure of many elected Republicans to disown Donald Trump after his false claims of election fraud sparked a deadly storming of the US Capitol last month.

These officials, some who served in the highest echelons of the Bush administration, said they had hoped that a Trump defeat would lead party leaders to move on from the former president and denounce his baseless claims that the November presidential election was stolen.

But with most Republican lawmakers sticking to Trump, these officials say they no longer recognise the party they served. Some have ended their membership, others are letting it lapse while a few are newly registered as independents, according to a dozen former Bush officials who spoke with Reuters.

“The Republican Party as I knew it no longer exists. I’d call it the cult of Trump,” said Jimmy GurulÃ©, who was Undersecretary of the Treasury for Terrorism and Financial Intelligence in the Bush administration.

Kristopher Purcell, who worked in the Bush White House’s communications office for six years, said roughly 60 to 70 former Bush officials have decided to leave the party or are cutting ties with it, from conversations he has been having. “The number is growing every day,” Purcell said.

Their defection from the Republican Party after a lifetime of service for many is another clear sign of how a growing intraparty conflict over Trump and his legacy is fracturing it.

The party is currently caught between disaffected moderate Republicans and independents disgusted by the hold Trump still has over elected officials and Trump’s fervently loyal base. Without the enthusiastic support of both groups, the party will struggle to win national elections, according to polling, Republican officials and strategists.

The Republican National Committee referred Reuters to a recent interview its chair Ronna McDaniel gave to the Fox Business channel. “We’re having a little bit of a spat right now. But we are going to come together. We have to,” McDaniel said, predicting the party will unite against the agenda of President Joe Biden, a Democrat.

Representatives for Trump did not respond to a request for comment.

A representative of former President Bush did not respond to a request for comment. During the Trump presidency, Bush made clear he had “retired from politics.”

More than half of the Republicans in Congress - eight senators and 139 House representatives - voted to block certification of the election just hours after the Capitol siege.

Most Republican Senators have also indicated they would not support the impeachment of Trump, making it almost certain that the former president won’t be convicted in his Senate trial. Trump was impeached on January 13 by the Democratic-led House of Representatives on charges of “incitement of insurrection,” the only president to be impeached twice.

The unwillingness by party leaders to disavow Trump was the final straw for some former Republican officials.

“If it continues to be the party of Trump, many of us are not going back,” Rosario Marin, a former Treasurer of the US under Bush, told Reuters. “Unless the Senate convicts him, and rids themselves of the Trump cancer, many of us will not be going back to vote for Republican leaders.”

Two former Bush officials who spoke to Reuters said they believe it is important to stay in the party to rid it of Trump’s influence.

One of those, Suzy DeFrancis, a veteran of the Republican Party who served in administrations including those of former presidents Richard Nixon and George W. Bush, said she voted for Biden in November but that breaking the party apart now will only benefit Democrats.

“I totally understand why people are frustrated and want to leave the party. I’ve had that feeling for 4 years,” DeFrancis said.

But she said it’s critical the party unite around Republican principles such as limited government, personal responsibility, free enterprise and a strong national defence.

Purcell said many felt they have no choice, however. He referred to Marjorie Taylor Greene, a freshman Republican congresswoman from Georgia who promotes the QAnon conspiracy theory, which falsely claims that top Democrats belong to a secret governing cabal of Satan-worshipping pedophiles. Another newly-elected Representative, Lauren Boebert from Colorado, has also made supportive statements about QAnon.

“We have QAnon members of Congress. It’s appalling,” Purcell said.