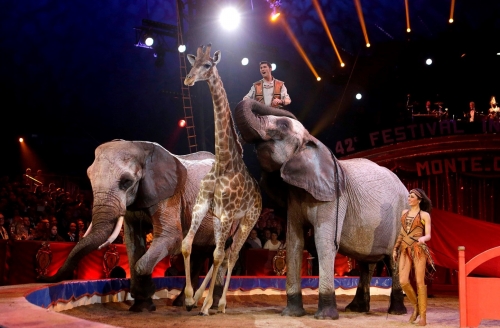 The French authorities intend to gradually ban the use of wild animals in traveling circus shows, as well as adding new orcas or dolphins to the artificial ponds, according to the Minister of Environmental Transformation Barbara Pompili.

The minister introduced a series of measures related to “taking care of animals in captivity,” announcing the decision to stop breeding American mink for their fur, with the saying, “Our attitude towards wild animals has changed in our time.”

"The time has come for our old admiration for these wild creatures to stop causing their families and restricting their living conditions," she said during a press conference.
The use of wild animals in the traveling circus teams will be completely stopped "in the coming years," according to what the minister said, without specifying any time limit, noting that "setting a specific date does not solve the problem." Instead, I would prefer setting up a mechanism to allow the matter to happen as soon as possible.
Solutions will be found on a case-by-case basis regarding the fate of these animals. This decision will only apply to the team's traveling animals and will not include other shows that feature wild animals.
The government is expected to allocate an amount of 8 million euros to help circus teams and dolphinariums.
The minister reminded that more than 20 European countries decided to limit or prohibit the use of animals in shows, as well as about "400 regions" throughout France.