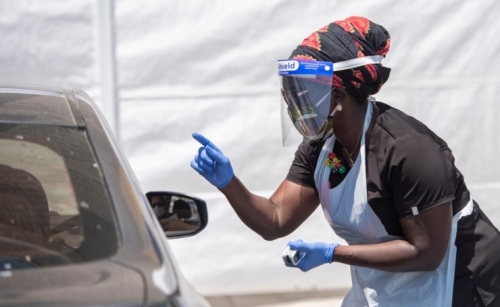 A surge in confirmed coronavirus cases continues across the western and south-western United States as parts of the country pause and roll back economic re-openings. In San Francisco, which saw one of the country's earliest lockdown orders, Mayor Londo Breed said the rise in Covid-19 cases and hospitalizations in the city and state "have made it so our public health experts feel it is not safe to move forward with the re-openings that were scheduled for next Monday, including indoor dining."

Texas reached a grim milestone on Tuesday reporting over 10,000 new single-day virus cases, according to data from the state's health and human services department. The new figure broke the previous daily record of 8,258, which it set on Saturday, according to Deutsche press agency (dpa).

Texas now has a total of 210,585 reported cases and 2,715 deaths. The only other US states to have surpassed 10,000 cases in a single day have been New York, which did so in April, and Florida earlier this month. Florida, meanwhile, reported more than 7,000 cases with a record-high positivity rate of over 16 percent on Tuesday.

Florida, which was among the most lax in implementing coronavirus restrictions, now has 213,794 cases and 3,841 confirmed coronavirus-related deaths. California Governor Gavin Newsom on Monday called on six counties to close all indoor dining operations as the state sees a 7-day case average of over 7,800 cases.

In Georgia the total number of cases topped 100,000 as of Tuesday afternoon, with 3,406 cases reported from Monday, according to the state's heal department. The current coronavirus pandemic situation in the US is "really not good," Anthony Fauci, the top infectious disease official said on Monday.

Despite dozens of states continuing to see spikes in virus cases, during a roundtable on Tuesday US President Donald Trump launched an effort to push state and local leaders to reopen schools in September. "You know, our mortality rate is, right now, at a level that people don't talk about, but it's down tenfold," Trump said. "So what we want to do is we want to get our schools open. We want to get them open quickly, beautifully, in the fall."