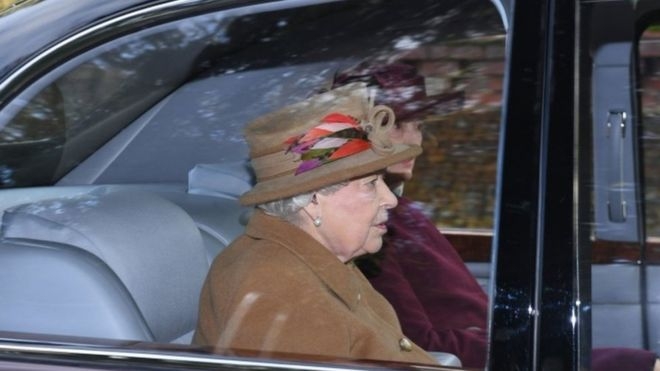 Queen and Prince Harry to hold talks over Sussexes' future

The Queen has summoned senior royals to Sandringham on Monday for face-to-face talks to discuss the future roles of the Duke and Duchess of Sussex.

Palace officials told the BBC that Prince Harry, the Duke of Cambridge and the Prince of Wales would all attend, while Meghan is expected join the discussion over the phone from Canada.

The Sussexes say they plan to step back as senior members of the Royal Family.

There is no suggestion a conclusion will be reached at the meeting.

But BBC royal correspondent Jonny Dymond said it is hoped that the talks will produce a "next step" on the way to defining the couple's new relationship with the Royal Family - in line with the Queen's wish to find a solution within days.

He added that there were still "formidable obstacles" to overcome in the talks.

Meanwhile, the Duke of Cambridge has spoken of his "sadness" at the broken bond with his brother, the Sunday Times reports.

According to the paper, Prince William told a friend: "I've put my arm around my brother all our lives and I can't do that any more; we're separate entities.

"All we can do, and all I can do, is try and support them and hope that the time comes when we're all singing from the same page."

Monday's gathering at the Queen's estate in Norfolk - being described as the "Sandringham summit" - will be the first time the monarch has come face-to-face with Harry since the Sussexes' announcement, which was posted on their official Instagram account.

BBC royal correspondent Nicholas Witchell said the trickiest area will be to agree the financial position of the Sussexes, who said in their statement on Wednesday they intend to "step back" as senior royals and work to become financially independent.

The couple also said they plan to split their time between the UK and North America, while "continuing to honour our duty to the Queen, the Commonwealth, and our patronages".

There are likely to be tax implications to any decision to base themselves outside the UK for any length of time and Buckingham Palace will want "tight protocols to prevent them cashing in on their royal status", our correspondent added.

The Royal Family was said to be "hurt" at the couple's statement. It is understood the Queen was not consulted in advance of their decision.