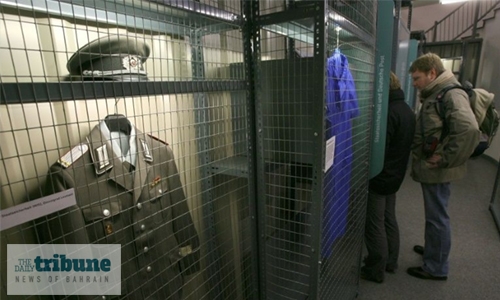 Berlin’s Stasi Museum, which showcases items of East Germany’s hated secret police, was burgled overnight, authorities said yesterday, days after a spectacular heist in Dresden. The burglars broke in through a window on the first floor, and “smashed several showcases, and stole medals and jewellery”, said police in a statement.

They made off with their spoils undetected. The hour of the raid was unclear but a museum employee found showcases smashed in the exhibition rooms on Sunday morning. The latest robbery came hot on the heels of a brazen heist at the Green Vault museum in Dresden’s Royal Palace on November 25.

Having sparked a partial power cut before breaking in through a window, the thieves stole priceless 18th-century diamond jewellery -- including a famous 49-carat Dresden white -- from the collection of the Saxon ruler August the Strong.

Police are still hunting four suspects, and have offered half a million euros ($550,000) in reward for information leading to an arrest or recovery of the stolen goods. Fears are growing however that the diamonds will never be recovered.