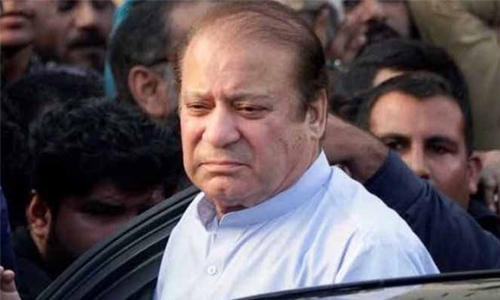 The family of former Pakistani prime minister Nawaz Sharif are trying to get a travel ban against him lifted so that he can go abroad for medical treatment, one of his close aides said yesterday. Sharif, Pakistan’s longest-serving premier, was ousted from his third term in office in 2017 and later imprisoned on corruption charges.

But his health has deteriorated in prison. Last month, he suffered a minor heart attack, his party said, adding that he is suffering from an autoimmune blood disorder. Sharif also suffers from high blood pressure and his kidney functions are deteriorating, according to aides. His doctor has claimed via Twitter that Sharif is “fighting for his life”.

Sharif has been bailed for health reasons and remains at a hospital in the eastern city of Lahore, but a ban remains in place forbidding him from travelling abroad. “The family of the former prime minister on Thursday formally approached the interior ministry asking the government to allow Sharif to travel abroad for medical treatment,” a Sharif aide told AFP on condition of anonymity.

Interior ministry officials did not immediately respond to requests for comment. A senior government official told AFP the issue was being referred to the Cabinet. The government is widely expected to grant the request, and a source in Sharif’s party, the Pakistan Muslim LeagueNawaz (PML-N), told AFP it is likely he will fly to London next week.