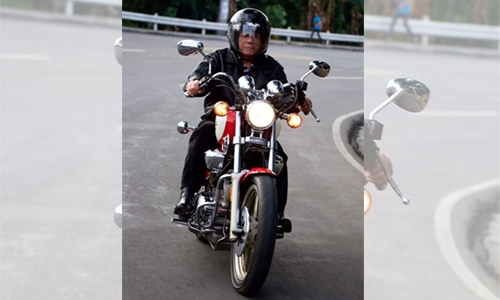 Philippine President Rodrigo Duterte hurt his hip and suffered scratches in a motorcycle accident, senior aides of the 74-year-old leader said yesterday. Duterte, whose health has been the subject of intense public speculation, suffered the mishap at the Malacanang presidential palace compound late Wednesday, according to spokesman Salvador Panelo.

The crash came 10 days after Duterte -- the oldest person to be elected Philippine president -- disclosed he is suffering from myasthenia gravis, an autoimmune disease that could potentially have serious complications. “The president was reaching for his shoe when he fell off his motorycle that resulted in a minor injury, particularly light bruises and slight scratches, to his elbow and knee,” Panelo said in a statement.

Senator Christopher “Bong” Go, his former assistant and close aide, earlier told reporters Duterte had “crashed” and complained of hip pain after the accident, but was not hospitalised. Panelo, citing Duterte’s girlfriend Cielito “Honeylet” Avancena, said the president’s injury will not require major treatment and “there is nothing to worry about”. Duterte was trying to park the vehicle after driving around a courtyard Panelo said, adding the leader was now resting at the palace.

Go later shared a video showing Duterte, wearing formal clothes -- without a helmet or other protective gear -- driving riding on a paved drive at night. The actual accident was not shown in the clip. Panelo declined to explain why there were two versions of the accident, stressing: “Whatever the story is, what is important is he is in good hands -- no major injury.”

35 killed in horror crash near Medina